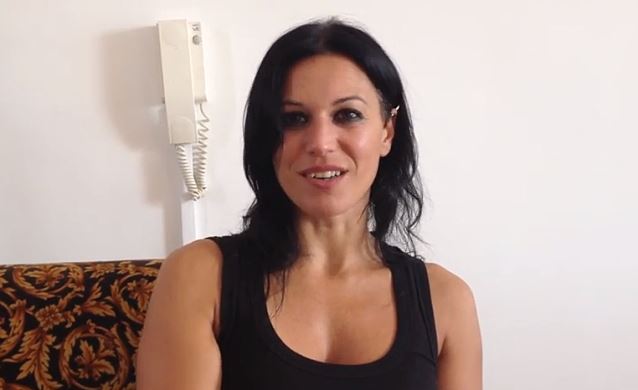 MetalSymphony.com recently conducted an interview with singer Cristina Scabbia of Italian heavy rockers LACUNA COIL. A couple of excerpts from the chat follow below.

MetalSymphony.com: Could you give us some hints about the new album? Title(s), themes… Maybe it's a bit early yet…

Cristina: It is definitely too early… We are arranging the lyrics these days and we are still recording the music. Obviously, I know a lot of details but… let's wait a little bit more! I can tell you that it will be a very… cinematic and dark album, in the vein of "Dark Adrenaline", but even more intense and heavier at times. We also have one special song that deeply touches me.

MetalSymphony.com: As you usually do, you've been touring in the U.S. once again. Do you consider there's some point at which you feel more supported in the U.S. than in Europe? What can you recall of this last tour?

Cristina: I think we pretty much have the same support from both sides of the ocean. The States are bigger so when we tour there, tours are longer and we need to stay there a lot, but we also have a great following in Europe. I am so happy about the fact that we can connect to so many people I've never even met. Music is magical.

MetalSymphony.com: Next October you'll join the line-up of the Metal Female Voices Fest in Belgium. After 11 years of this festival, what do you think it still has to offer to the audience?

Cristina: The bands are quite different every edition so there is always a surprise in terms of newcomers or new shows given by the most known acts. If you like bands fronted by women, this is definitely the place to be, and is also something unique in the world!

MetalSymphony.com: On your side, what will you offer Metal Female Voices Fest's audience? Last year you were there to celebrate its 10th anniversary. Will this year's show be different from that one? Will you gift us with a new song maybe?

Cristina: We played last year and it was a success, so we've been invited again and decided to do something we've never done before, play one complete album from the past. We will be playing ALL the songs from the album "Karmacode", plus some more…

Read the entire interview at MetalSymphony.com.