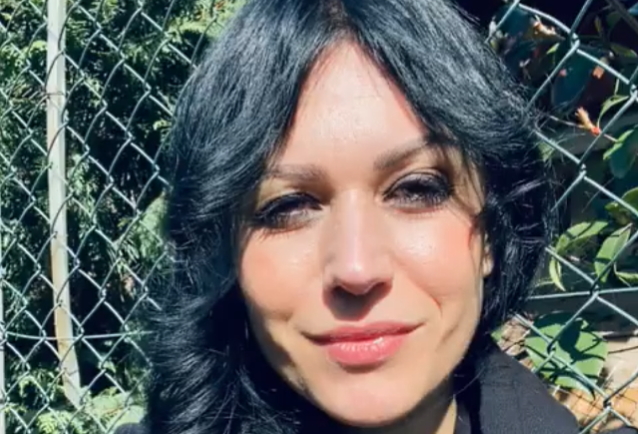 LACUNA COIL singer Cristina Scabbia has explained the band's decision to take part in an initiative dubbed "L'Ultimo Concerto?" (Last Concert) to highlight the increasingly uncertain future of music venues. Instead of delivering live performances as part of a scheduled free virtual stream on Saturday, February 27, each of around 130 Italian artists was filmed taking the stage at a different venue and then standing there in silence as a way of commemorating the one-year mark since the first Italian venues closed.

Earlier today (Sunday, February 28), LACUNA COIL's social media was updated with a video message from Cristina, in which she said: "I know that a lot of you guys have been connecting to the web site ultimoconcerto.it expecting a live concert that never happened. What you saw was a video of us entering the venue Alcatraz in Milano and standing still on the stage, looking at an empty club. What we did was taking part in an Italian strike, and I'm here explaining it in English because a lot of you guys probably couldn't read what was written on the web site and couldn't figure out that this event was already really strange from the beginning, because more than 120 Italian bands playing from different clubs at the same time was already something very unusual — let alone the fact that we never really promoted it, we never really talked about it, we never reposted some of your posts, and if you think about [LACUNA COIL's September 2020] 'Live From The Apocalypse' [virtual concert], we always did that.

"Of course, we couldn't say anything, because the purpose was to make noise," she continued. "So I absolutely understand your frustration, I absolutely understand your anger, and believe me, all of us [in] LACUNA COIL wanted to be on that stage to play a real concert for you. What you have to understand, though, [is] it is not easy to organize a concert, and there are costs behind [it] that you cannot imagine. So the point of the Italian strike that happened yesterday was to bring attention to the fact that clubs have been closed for a year because of the pandemic, and we don't know when they are gonna be reopening again. So I want to thank you guys, because even with your angry messages, even with your disappointment, you helped us to scream even louder.

"Some of you guys wrote, it is useless to 'attack' or 'use the fans,' which is something that we never did intentionally. Well, think about the fact that the band is followed by a lot of journalists as well, so your angry comments are even more helping the music scene, because people will see this and will see that music without live clubs is missing a huge part.

"So I'm here to thank you guys and to tell you that we're really hurt by some of the comments, but we know that this will be worth it," Scabbia added. "So we want to thank you.

"[We'll] hopefully see you in a real club, in a real show very, very soon. And thank you for the understanding. We] love you guys."

Organized by KeepOn Live, Arci, Assomusica and Live DMA, the "L'Ultimo Concerto?" campaign was announced last month when the venues shared images on social media of their year of foundation and the year 2021 with a question mark, suggesting that their closures due to the coronavirus pandemic could be permanent.

Earlier on Saturday, Italy announced it was tightening restrictions in five of the country's 20 regions in an effort curb the spread of the coronavirus.

There have been more than 2.9 million confirmed coronavirus cases and 97,500 deaths in Italy since the pandemic began. It is the second-highest death toll in Europe after Britain and the seventh-highest in the world.

‼️ Important message from us ‼️