Currently celebrating their 20th anniversary, Italian metal icons LACUNA COIL and the band's longtime label, Century Media, have decided that it is time to enter another chapter in their relationship. Both parties are pleased to announce that LACUNA COIL have just signed a new deal with Century Media.

LACUNA COIL lead vocalist Cristina Scabbia shared her feelings on the band's continued partnership with their longstanding label: "I am so excited to have signed with Century Media again. Nowadays it is so important that, whichever label is backing up an artist or a band, one has full trust in the artistic and musical vision. I know that LACUNA COIL and Century Media will continue to work hard together to make common goals happen faster and more successfully.'

Andrea Ferro (vocals) adds his thoughts: "We are really excited about starting this new adventure with Century Media Records. We've had some great 20 years together that helped us become an internationally successful band. Like in every relationship, there have been ups and downs, but overall we've worked with some great people who have always been willing to grow up with the band and together we have achieved really amazing goals. Here's to another chapter about to start and more successful stories!"

Antje Lange, general manager international of Century Media Records, also commented on the label's new deal with LACUNA COIL, saying: "Century Media Records is very happy that LACUNA COIL have renewed their contract with us and we are very much looking forward to the next albums from this exceptional Italian band. Century Media appreciates the continuous trust of the band. The recent album 'Delirium' charted in 12 countries and the band is touring around the globe."

In addition to re-signing with Century Media, LACUNA COIL recently announced that they will be joining Dutch symphonic metal giants EPICA on the North American leg of the band's "The Ultimate Principle" tour. The month-long September trek marks the band's first U.S. tour dates in over a year, as they continue to support their latest full length studio album, "Delirium". Joining LACUNA COIL and EPICA on "The Ultimate Principle" tour are INSOMNIUM and ELANTRIS.

"Delirium" was released last May through Century Media. The CD was recorded at BRX Studio in Milan between December 2015 and February 2016. The effort was produced by LACUNA COIL bassist and main songwriter Marco "Maki" Coti-Zelati, with engineering by Marco Barusso and additional assistance from Dario Valentini. Coti-Zelati also created the artwork for "Delirium", which is based on an atmospheric session captured by Italian photographer Alessandro Olgiati.

LACUNA COIL has recruited Diego Cavallotti as a fill-in guitarist for the band following the departure of Marco "Maus" Biazzi.

Biazzi left LACUNA COIL in January 2016, explaining in a statement: "I felt I couldn't add more in this project any longer so I decided to leave my second family, LACUNA COIL, to take a different path for a new challenge in my life. 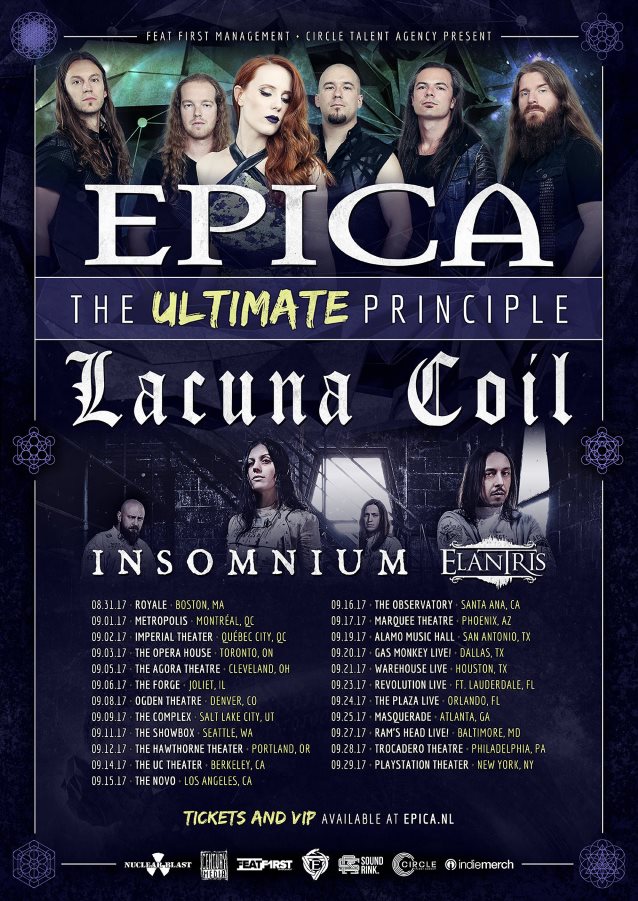