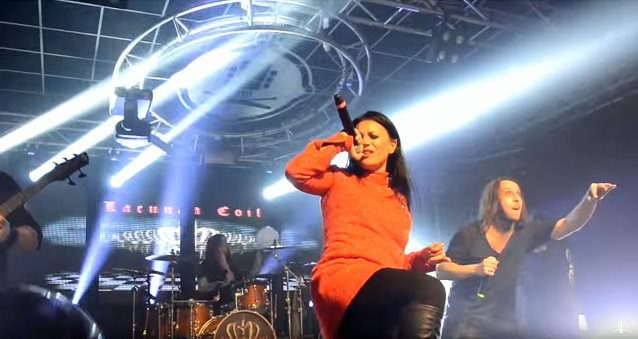 Multi-camera fan-filmed video footage of LACUNA COIL performing the song "Our Truth" on December 11 at Campus Industry Music in Parma, Italy can be seen below.

LACUNA COIL recently entered BRX Studio in Milan to record its new album, "Delirium", for a tentative May 2016 release via Century Media. The CD is being produced by LACUNA COIL bassist and main songwriter Marco "Maki" Coti-Zelati, with engineering by Marco Barusso and additional assistance from Dario Valentini.

LACUNA COIL singer Cristina Scabbia told "Loudwire Nights" host Toni Gonzalez: "It's been a crazy couple of years for different reasons, for personal reasons and for a lot of things that we will disclose, or we will tell later."

She added: "It's heavier than the previous albums we did, which is kind of surprising, because a lot of bands are going the other way around and getting softer and more accessible."

Cristina previously said about the group's upcoming follow-up to 2014's "Broken Crown Halo" album: "It's gonna be different. I mean, we have a slightly different lineup [following the recent departures of guitarist Cristiano 'Pizza' Migliore and drummer Cristiano 'CriZ' Mozzati], because we have a new drummer [Ryan Blake Folden] and we're gonna be working with one guitar only, so everything will be more straight to the point. We're gonna be using a lot more electronic arrangements — very weird… It's gonna be very mystique, dark… We're still deciding a lot of details, so it's hard to tell you exactly how it's gonna sound like, but so far, from the demos, it sounds like definitely a different phase of LACUNA COIL."