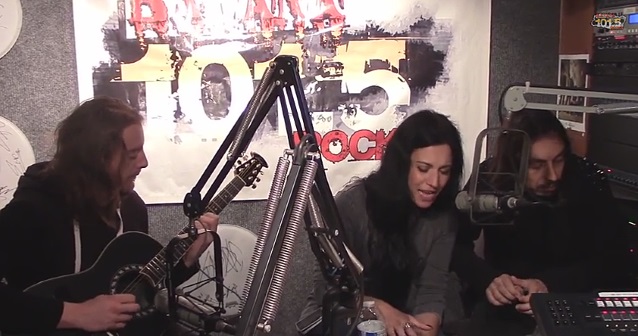 Italian heavy rockers LACUNA COIL took part in an interview and acoustic performance in the studios of the Flint, Michigan radio station Banana 101.5 on April 16. Video footage of their appearance can be seen below.

In a recent interview with Ghost Cult magazine, LACUNA COIL vocalist Cristina Scabbia stated about the most recent lineup changes: "We have known this was happening since December [2013], really. We sat down to discuss the tour schedule this year and they let us know it was time for them to do something different. It was readily apparent that they were not into the touring lifestyle and that's fine. There was no fight or anything like that. We are continuing on our path and they are on theirs. It did not affect the [making of the new LACUNA COIL] album ['Broken Crown Halo'] and there was still a very friendly atmosphere when we were recording the album together. Marco [Coti Zelati], our bass player, is our main songwriter anyway, so nothing much will change writing-wise."