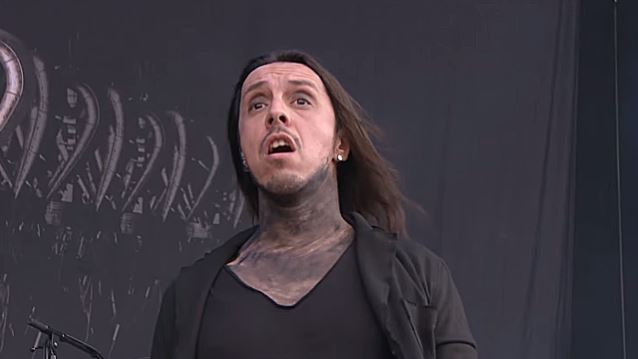 Michelle Livings of TotalRock conducted an interview with vocalist Andrea Ferro of Italian heavy rockers LACUNA COIL at the 2015 edition of the U.K.'s Download festival, which was held last weekend in Donington Park. You can now watch the chat below.

Speaking about LACUNA COIL's plans to write and record the follow-up to last year's "Broken Crown Halo", Ferro said: "Last year, we've been mostly touring, especially in North America, Canada, South America, Russia, Europe… And this year, we're taking a little easier, just doing the festivals and some summer shows in our homeland, in Italy, and we're working already on new songs, actually. 'Cause by the time we're gonna record it and promote it and put it out, it's gonna be two years from the previous one. So we have a lot of music right now, and we're just starting with the vocals. So we're gonna keep going, probably have it… maybe recording at the end of the year and release it next year. That's the plan."

Asked if there will be a change in LACUNA COIL's musical direction because of the recent departures of guitarist Cristiano "Pizza" Migliore and drummer Cristiano 'CriZ' Mozzati, the band's singer, Cristina Scabbia, told MetalPR.com: "There will [still] be melody, for sure, because that's part of our Italian heritage. And I like melody in songs. I like the heaviness of the songs, but I also like when you hear a song and you can remember parts of the song itself. Not just, like, straight violence in your face, but also, 'Oh, that's a good chorus. That's a good melody.' That's the way I like it, at least. So I believe that the next record might be heavier, because we have a new drummer, so he will probably be experimenting more on his side. It's the first time that we will write with Ryan [Blake Folden]. But the main composers, the main songwriters are still in the band, so I don't think it's gonna be something that worries us. I mean, we feel pretty confident that we will come up with a great record."