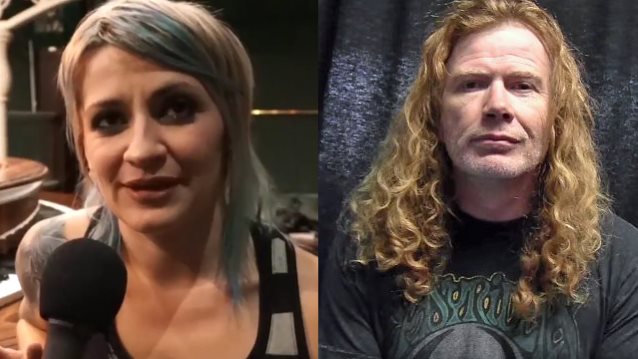 Christian singer and former FLYLEAF frontwoman Lacey Sturm told ROCKwell UnScene in a new interview that she is surprised more musicians haven't had "encounters with God." But, she added, "I've seen there's so much more lately than ever. I got to meet Dave Mustaine [MEGADETH mainman] the other day, and I was so amazed at him. The first thing he talked to me about was God. And he's just so real, and he can say whatever he wants; he doesn't have to impress anybody. And he's just, like, 'Hey, so I heard you love Jesus?' And he's just like looking at me. [And I was like] 'Yeah.'"

Mustaine spoke about "spirituality" during a 2016 interview, telling Honolulu, Hawaii radio host Dave Lawrence: "A lot of people believe that I'm into religion, because I had said that I had become a Christian. So let me just say that religion's for people who are afraid of going to hell, and spirituality's for people like me who've been there. And I say that there's a whole spirit world of stuff that… There's good and bad in everybody and in all things."

Those comments echoed what Mustaine said three years earlier in a chat with the Nashville Scene. He stated at the time: "I don't think that my faith has anything to do with my lyrics. I try and keep religion out of it. Frankly, for me, I don't believe in religion. I have a personal relationship with God and with Christ, and that's it. I don't push that on anybody; it's private. I kind of leave it there. [MEGADETH bassist] Dave's [Ellefson] real open about it."

In a 2012 interview with Great Falls Tribute, Ellefson — who recently became a Lutheran pastor — talked about how he and Mustaine renewed their interest in Christianity. "It's pretty funny, isn't it? When you fight [God], you have struggles and it's an uphill battle. When you surrender to it and you embrace it, that becomes like a jet engine that rockets you forward with not just great success but ease," he said. "All of a sudden, you're not operating from a place of always being so competitive and fear-based. You start to go downstream instead of always paddling upstream."

"The only reason we talk about [our faith] is because people ask us about it. The MEGADETH tour isn't some crusade. We're not on some mission."