Phil Lewis and Stacy Blades of glam/sleaze icons L.A. GUNS; Rocky Shades of UK's glam metal act WRATHCHILD; and UK flamenco rockers the GYPSY PISTOLEROS will be interviewed by Chris Nelson on next weekend's edition of "Hair Metal Haven" on Rock 247 Online. The show will be broadcast between 17.00 and 19.00 GMT on Saturday, November 8.

To listen to the program via the Internet, click here.

2008 saw L.A. GUNS touring all over the United States and abroad in support of the 20th anniversary of the band's first album. In 2009 L.A. GUNS plan on staying on the road throughout the year with dates being worked out for Japan and Australia as well as all over the U.S., including a special NAMM weekend show at the legendary Whisky A Go-Go in Hollywood, California in January. They've also just been added to the Rockin' The Waves Caribbean cruise in March hosted by Ambre Lake of "Rock of Love 2" fame. SKID ROW, FIREHOUSE and TRIXTER will also be performing.

L.A. GUNS' latest album, "Tales from the Strip", was released in August 2005 in the U.S. via Shrapnel Records. The CD, which was produced by Andy Johns (LED ZEPPELIN, THE ROLLING STONES), was lyrically inspired by a historically significant rock scene that L.A. GUNS had a strong hand in creating.

Phil Lewis' L.A. GUNS is not to be confused with the Tracii Guns-led version of the group, which is also continuing to record and perform under the L.A. GUNS moniker. 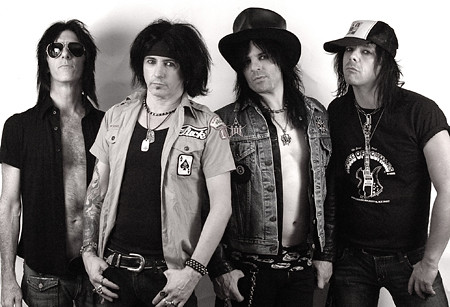