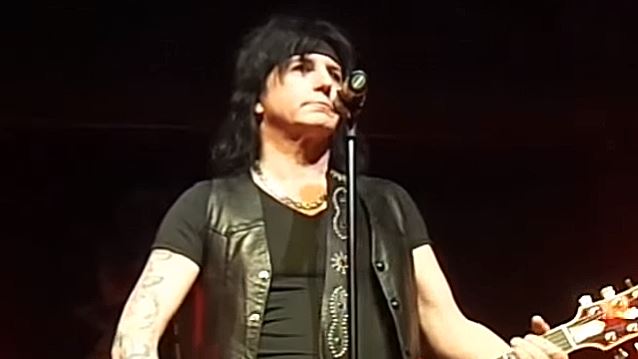 L.A. GUNS frontman Phil Lewis paid tribute to late superstar Prince by giving a controversial speech about the supposed lack of diversity in the type of music that is performed by African-American artists.

While introducing L.A. GUNS' breakthrough hit single "Ballad Of Jayne", Lewis — who was born in England but has lived in the U.S. since the 1980s — spoke about Prince's passing and recalled L.A. GUNS' first performance at the club that the iconic artist helped turn into a must-see mecca after featuring it in his breakthrough 1984 film "Purple Rain": Minneapolis's First Ave.

"I remember when we were working on [L.A. GUNS' 1989 album] 'Cocked & Loaded', we were on tour, and they said there was a venue that we could play in Minnesota; it was called First Avenue. And I didn't know too much about it at the time. But after I saw the movie, and I got it; I was with the program.

"We were all into that Prince, right?! 'Purple Rain'. It was so cool, because, you know, you had all your heavy shit, and then you had the pop shit, and there was Prince doing his own fucking thing.

"The problem is, right now — and I'm not gonna be a racist about it — but black people are all one-dimensional. We need more Princes, man. We need less fucking rappers and more people like Prince.

"Anyway… When we first played First Avenue, nobody knew whe the fuck we were; we were opening for someone. I don't know. And it wasn't going very well, I'll be honest. You never know with these things. And then we played this song and it changed everything."

Video of Lewis's entire speech, including a performance of the song "Ballad Of Jayne", can be seen below.