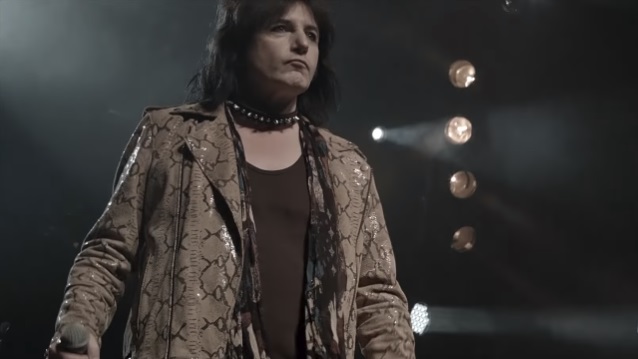 Ever since AC/DC completed the tour cycle for its 2014 album "Rock Or Bust" nearly two years ago — a turbulent trek that weathered the forced retirement and eventual death of co-founder Malcolm Young, plus the departures of longtime singer Brian Johnson, drummer Phil Rudd and bassist Cliff Williams — fans have wondered whether sole founding member Angus Young would keep the band going or decide it was time for AC/DC to pack it in.

Singer Angry Anderson of the veteran Australian act ROSE TATTOO said in a recent interview with The Rockpit that Angus told him he is at work on new AC/DC music and intends to have GUNS N' ROSES frontman Axl Rose — who took Johnson's place on the road in 2016 — sing on the LP.

Asked by Sticks For Stones if Angus should record a new AC/DC album with Axl, Lewis said (hear audio below): "Yeah, if they can come up with some songs, and it sounds good… Because, clearly, Angus isn't ready to retire, and it's highly unlikely that Axl's gonna do another GUNS N' ROSES record. So, yeah, why not? Fuck it — it might be interesting to see what those two come up with. I hope they do it."

He continued: "Axl sure can nail… he nails Brian's parts really well. He can hit the notes, but he just doesn't have the gravel; it's a little clean when he does it. And that's a tiny, tiny criticism, because he does it so well. But Brian Johnson's just got that grit. But, yeah, it'll be interesting to see what happens."

Johnson was forced to leave AC/DC mid-tour due to a dangerous level of hearing loss, while Rudd was dismissed following a drug arrest and Williams decided to retire at the end of the cycle.

Malcolm Young was diagnosed with dementia several years ago and bowed out before the sessions for "Rock Or Bust" began. He died this past November.

Angus has not said publicly what he has planned for the future of AC/DC. Axl is still touring with GUNS N' ROSES but has indicated a willingness to work with AC/DC again. It is also unknown whether Angus will keep the other members of the last touring lineup — including guitarist Stevie Young and drummer Chris Slade — or revamp the roster again.