Norway's KVELERTAK, a band that combines immediacy and exuberance with a harder edge, have recently been in the Caliban Studios in Oslo to record five new tracks. Unlike their 2008 demo, "West Coast Holocaust", a reference to the area of Norway in which they are based, the new tracks represent a move away from the band's usual DIY approach to recording. Guitarist Bjarte comments: "We wanted to spend the first couple of years refining the KVELERTAK sound, which I guess you could call metal-flavored punk rock (or necro 'n' roll, as we call it), so we recorded and produced 'West Coast Holocaust' ourselves, and also designed all the artwork and packaging. But we've reached the point now though, where things are starting to happen for the band, and we are ready for a more professional approach to the production. Ruben Willem, guitarist with Oslo-based necro-sludgers HAUST, engineered, mixed and mastered the tracks, and it worked out very well. He was able to catch our sound and our energy perfectly."

Two of the tracks feature guest appearances from members of two of Norway's biggest bands, with CARPATHIAN FOREST frontman Nattefrost guesting on "Fossegrim", and Ivar Nikolaisen of SILVER featuring on "Blodtørst". Both tracks have been made available for streaming on KVELERTAK's MySpace page.

After kicking off 2009 with three appearances at the By:Larm festival in Oslo, KVELERTAK is due to embark on a Norwegian tour with SKAMBANKT, SILVER and HAUST, and will also play at the Øya festival in Oslo in August. Plans are currently being made for a European tour and a new release. 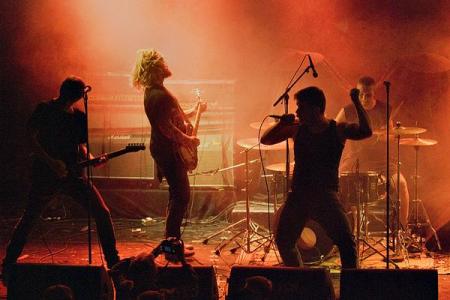