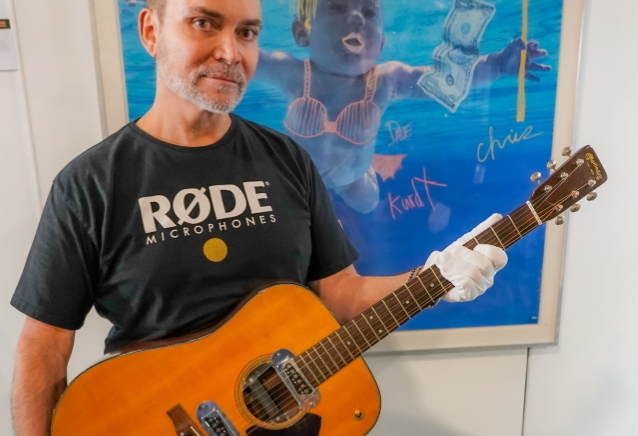 Freedman plans to display the guitar in a worldwide tour of exhibitions to be held in distinguished galleries and art spaces, with all proceeds (including the guitar) going to the performing arts.

"When I heard that this iconic guitar was up for auction," says Freedman, "I immediately knew it was a once-in-a-lifetime opportunity to secure it and use it as a vehicle to spotlight the struggles that those in the performing arts are facing and have always faced."

He continues: "The global arts industry has been shattered by the impact of COVID-19, with musicians and artists being amongst the most affected. The last few months were the straw that broke the camel's back, and for many in the arts brought forth the harsh reality that they work in an industry for which there is little support in times of need.

"For most, access to financial and health services — particularly mental health services — is very limited. While many industries are gradually returning to normal, it's going to take a long time before this industry can begin functioning as it was. The toll this has taken and will continue to take is enormous and requires more than just lip service. It requires action now, and I am a man of action."

In a live taping for the popular "MTV Unplugged" series on November 18, 1993, approximately five months before his death, Cobain chose this guitar to paint what Rolling Stone called "his last self-portrait." NIRVANA's acoustic performance that night produced one of the greatest live albums of all time, "MTV Unplugged In New York", with recordings of the most celebrated and defining versions of NIRVANA's songs. The multi-platinum "MTV Unplugged In New York" debuted at number one on the U.S. Billboard charts and won the Grammy Award for "Best Alternative Music Album" in 1996.

"NIRVANA's 'Unplugged' is one of my favorite records of all time," says Freedman, "and easily one of the best live performances ever captured on film. They were a huge influence on me; the early-90s were RØDE's formative years, and NIRVANA's music was very much the soundtrack to that time in my life and that era of the company."

The guitar was the seventh of only 302 D-18Es built by Martin and was customized by Cobain who added a Bartolini pickup to the soundhole. Accompanying the sale of the guitar is its original hard-shell case personalized by Cobain with a flyer from the punk rock band POISON IDEA's 1990 album "Feel The Darkness", three baggage claim ticket stubs, an Alaska Airlines Fragile sticker affixed to the case, a partial set of Martin & Co. Phospher Bronze guitar strings, three Dunlop 60mm guitar picks, and a small black velvet pouch containing a miniature silvertone knife, fork, and spoon lapel pins each with pinbacks.

Video of the auction of the "MTV Unplugged" guitar can be seen below.

Other NIRVANA items sold at the auction included a signed "Nevermind" poster ($56,250); the camera, original negatives and signed original prints, and the copyright from NIRVANA's 1992 SPIN magazine photoshoot ($35,200); and NIRVANA all-access passes ($512 each). 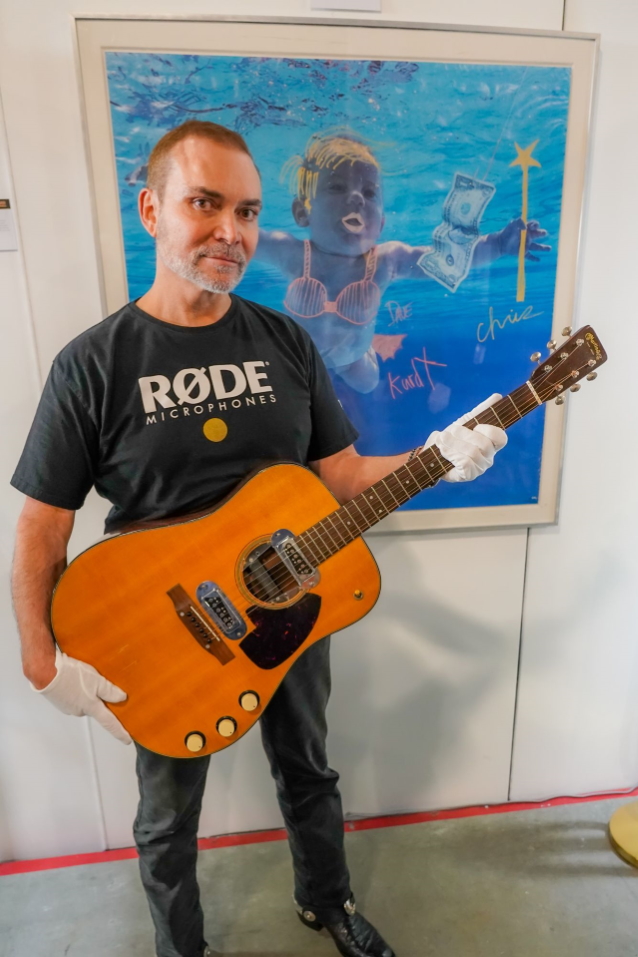