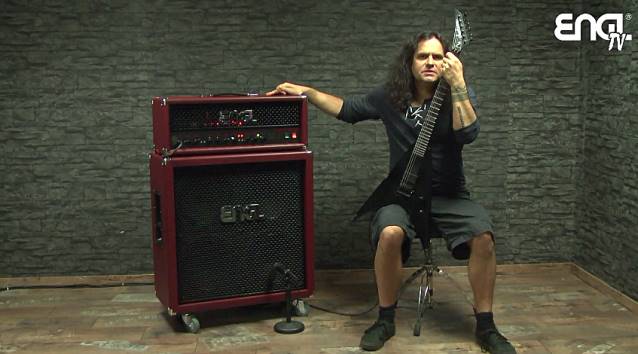 Video footage of Mille Petrozza of German / Finnish thrash metallers KREATOR demonstrating his limited edition ENGL "Extreme Aggression" signature amp and matching 4x12 cabinet can be seen below. Only 150 of these have been built and only about 10 are available in the U.S.

The "Extreme Aggression" offers an unbelievable amount of gain and punch, being especially heavy in the lower mids and bass frequencies. Suitable for Mille and the overall KREATOR sound, this amp can produce a stinging, aggressive and striking Hi-Gain sound, presenting every riff and nuance with clarity and brings along the speediness that is typical for ENGL.

During design collaboration with Mille, ENGL discovered its Fireball 100's main features (2 Channels, 2 Masters, FX Loop, etc.) met all of his needs. But apart from that, this signature amps stands on its own sound-wise, which leads to a whole new sonic experience. Topping it all off with red tolex, the new and edgy front plate gives the amp the right "in-your-face" attitude.

KREATOR will support Swedish / American / Canadian metallers ARCH ENEMY on a North American tour this October/November. Also appearing on the bill will be HUNTRESS and STARKILL.