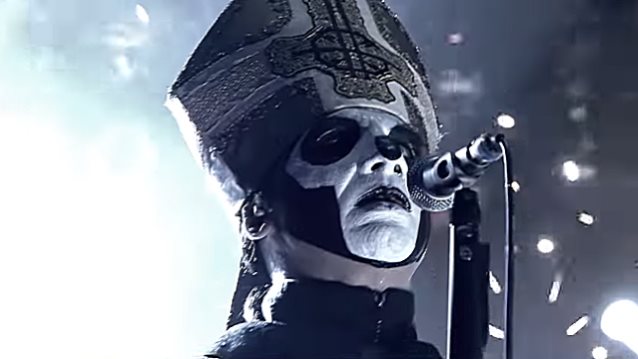 GHOST frontman and founder Tobias Forge, better known as Papa Emeritus, joined German thrashers KREATOR last night (Tuesday, April 25) to perform the song "Satan Is Real" on the German late-night talk show "Circus HalliGalli", which airs on ProSieben. Also appearing on them was DRANGSAL singer/guitarist Max Gruber. Video footage of the performance can be seen below.

"Satan Is Real" is taken from KREATOR's latest album, "Gods Of Violence", which was released in January via Nuclear Blast. KREATOR guitarist/vocalist Mille Petrozza told Metal Blast about the track: "When I was growing up as a kid, I was imagining the world would be a better place in the year 2000, because for most of the people that I knew, religion didn't mean anything. It was something from the past, something that only their parents, or even their grandparents, would think was relevant. In the '80s and '90s, I pictured the future as a time when religion would lose its relevance, and yet now we're in the year 2017, and religion is stronger than ever. It's so strong that even though not many people follow religions, the ones that do can be very extreme. 'Satan Is Real' talks about that, about the blind leading the blind."

The cover artwork for "Gods Of Violence" was created by renowned artist Jan Meininghaus, who also made the limited-edition artwork for KREATOR's last disc, 2012's "Phantom Antichrist", and has lent his talents to bands like BOLT THROWER, ACCEPT and OVERKILL in the past. The exclusive North American cover was created by renowned artist Marcelo Vasco, who has previously worked with SLAYER, MACHINE HEAD, SOULFLY and HATEBREED.