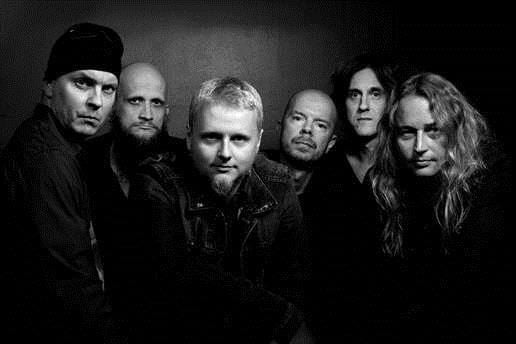 Combining elements of modern and traditional death metal with '70s progressive rock and folk, BARREN EARTH, now reinforced by Faroese native lead singer Jón Aldárá, managed to build up an excellent reputation with only two albums. Their debut, "Curse Of The Red River" (2010), and its follow-up, "The Devil's Resolve" (2012) have already solidified the band as one of the most promising up-and-coming acts of the genre and now they are at the ready to release another milestone in their career, taking the experimentation and heaviness to even further heights.

The band comments: "It's the middle of a long, dark and cold winter here in Finland. However, there's no limit to our excitement as the future looks really bright today!

"We have a new set of music about to be released, having worked our asses off to create not just another album but a piece of real substance and weight in a world of cheap thrills and quickly forgotten gimmicks. We really poured our hearts and souls on this one and it's by far our best work yet.

"For this most important release in our career, it was obvious we should only be partnering with the best possible label — nothing less than the mighty Century Media.

"We truly feel we could not be in better hands. This is where we want to be, the stars are aligned and all the ducks are in a row.

"2015 is going to be the biggest year ever for BARREN EARTH!"

Adds Jens Prüter, head of A&R at Century Media Europe: "I still remember hearing the early BARREN EARTH demos six years ago in November 2008. We all liked it, but one reason or another, we were not then able to sign them. Fail. These fine gentlemen from Finland have now created and developed into a serious force in progressive death/doom metal. The band had progressed into one of the most interesting bands of the genre — mainly because they go beyond the boundaries of any genre and create a dark world of their own. It takes a while to fully get into their sound universe, but that's what I like even more in our short-lived time.

"I'm sure the new album will be a timeless classic and I want to thank BARREN EARTH for knocking at our door again.”