German thrash titans KREATOR have released the third video trailer for their upcoming album, "Gods Of Violence". Watch KREATOR mainman Mille Petrozza talk about the inspiration for, and his favorite tracks on, the new disc.

In other news, Petrozza will be take part in a Facebook live question-and-answer session today (Friday, January 6) at 11 a.m. PST/ 2 p.m. EST / 8 p.m. CET. You can watch the chat at www.Facebook.com/KREATORofficial.

"Gods Of Violence" will be released on January 27 via Nuclear Blast Records. The cover artwork for the disc was created by renowned artist Jan Meininghaus, who also made the limited-edition artwork for KREATOR's last album, 2012's "Phantom Antichrist", and has lent his talents to bands like BOLT THROWER, ACCEPT and OVERKILL in the past.

The video for the "Gods Of Violence" title track can be seen below. The clip was filmed with renowned video production company Grupa13, which has previously worked with AMON AMARTH, BEHEMOTH and ELUVEITIE.

KREATOR will headline this year's edition of the annual Decibel Magazine Tour. Support on the trek will come from Florida death metal legends OBITUARY, old-school Ohio brutalizers MIDNIGHT and celebrated progressive death prodigies HORRENDOUS (with regional openers in select markets to be announced next year). 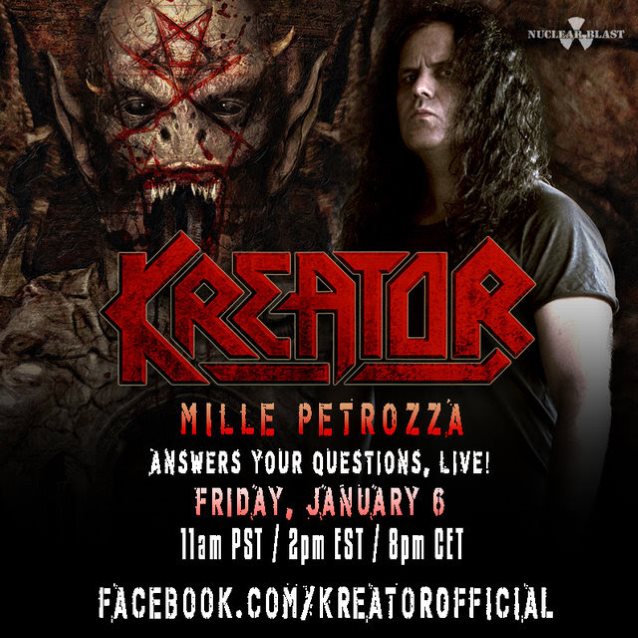