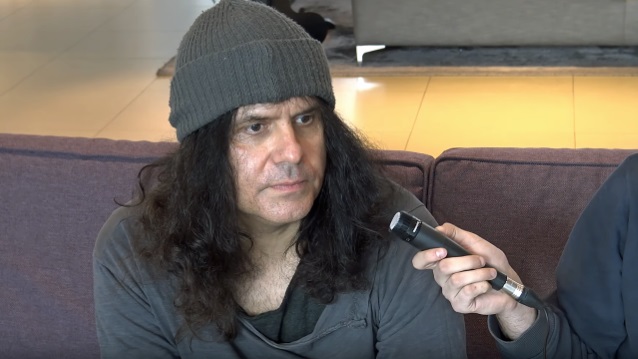 Agoraphobic News conducted an interview with frontman Mille Petrozza of German thrash legends KREATOR prior to their appearance at the Belgrade Metal Meeting, which took place January 19 at Hala Sportova in Belgrade, Serbia. You can watch the entire chat below. A few excerpts follow (transcribed by BLABBERMOUTH.NET).

On the reception to the band's 2017 "Gods Of Violence" studio album:

Mille: "I'd say the fans really reacted great because we've been playing the songs for a year now and it seems like there's no difference between the old songs and the new songs. When we go into a live situation, people sing along just as much as they do for the old songs. So, I would say that's a good sign."

On whether the Chernobyl nuclear disaster of 1986 played an important role in shaping the lyrics of thrash metal bands from that era:

Mille: "[Laughs] I think the thrash movement could have done without Chernobyl. [Laughs] But, in general, it's like a metaphor for the '80s paranoia of nuclear holocaust, nuclear war, that kind of stuff, so, it has an importance, but it's like the main theme of the '80s. There was nuclear power, which was fairly new and there was a lot of protests against it. I think for a reason, it's something not to mess with, you know. If there's an accident, you can see what the consequences were in Chernobyl, for example. I'd say that it played an essential part in the paranoia of the '80s."

On KREATOR songs such as "Total Death" and "As The World Burns" that are about nuclear war and whether the threat of nuclear annihilation is worse in the '80s than it is now:

Mille: "You can tell that we were children of the '80s just by reading our lyrics. Yes, there was not so much information. It was this kind of like, mysterious threat of nuclear war and when I was in school, we saw this movie called 'The Day After'. Not the one that was on TV, but there was another one, there was another one that was like a mockumentary, like a fake documentary that played in England and it showed the consequences, the effect of a nuclear strike. It was very horrifying. It's black and white and very dark."

On what the song "Terrible Certainty" is about:

Mille: "I think that was about the AIDS paranoia, like the plague, save us from the plague. We were really in the '80s, we were really scared of that we would catch a horrible disease while the nuclear war is starting."

On whether KREATOR's lyrical topics of the '80s have more of an impact today:

Mille: "I think I'm exaggerating in my lyrics. I'm a very positive-thinking person. I think what's important is that you become aware of the facts and about the reality we're living in without giving up. We need to become aware to know what's wrong and to fight against [evil corporations]. You have the power, as a consumer, you have the power, you don't have to buy Nestle products."

On how he felt about the 1989 fall of the Berlin Wall:

On what inspired the "Enemy Of God" album title:

Mille: "Maybe it was a little influenced by the September 11 [terrorist attacks], the 'Enemy Of God' song, yes. It's about terrorism. It's about what was happening at the time."

On whether he's afraid of a terrorist attack during one of his concerts:

Mille: "We all should be very careful, but I'm not afraid. Whenever death comes, it comes. [Laughs]"

KREATOR and SABATON will join forces for a North American co-headlining tour this winter. The 24-date trek kicks off on Thursday, February 8 at The Van Buren in Phoenix, Arizona and makes stops in Los Angeles, Montreal, and Philadelphia before concluding at Jannus Landing in Tampa, Florida on March 10.

KREATOR is continuing to tour in support of "Gods Of Violence", which entered the official chart in Germany at position No. 1. The cover artwork for the album was created by renowned artist Jan Meininghaus, who also made the limited-edition artwork for KREATOR's previous effort, 2012's "Phantom Antichrist", and has lent his talents to bands like BOLT THROWER, ACCEPT and OVERKILL in the past.