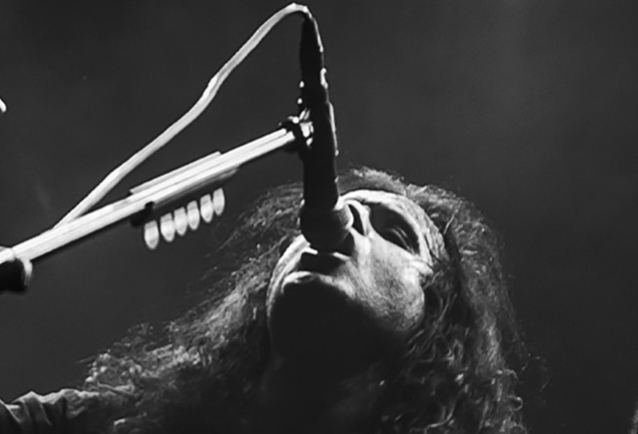 KREATOR frontman Mille Petrozza took part in Andertons Music Co's "ESP Social Takeover Weekend" on Saturday, May 8. Asked what advice he had for up-and-coming guitarists, Mille said (as transcribed by BLABBERMOUTH.NET): "I would say that it's mostly important to create [your own style]… Of course, you can always be influenced, you can always see what other people are doing. Especially when you start out, it's essential in order to develop your own style and your own tone. I did that, and I think most guitar players look up to certain people and learn the tricks and the basics. But I think once you took that step, you should try to at least develop your own style. And that can be your own tone, because you don't play like other people, or your pickings or the sound you're trying to create. I think you should try to develop something unique. That's my advice. Don't try to become the next Steve Vai or the next whoever you think is a great guitar player, but try to be yourself. Because there's no one there yet that plays like you."

Two months ago, Petrozza revealed to the official podcast of Italy's Metalitalia.com that KREATOR would wait until the coronavirus pandemic has subsided before releasing an album.

"Last summer, in August, we felt that we were done [writing], and we were very enthusiastic about, like, 'Okay, this is almost an album. We have 12 songs. And we take the 10 best, or whatever we come up with.' And we already planned on going into the studio in February," he said. "Now it's February, and the world is still kind of fucked with the COVID. So we have to wait and be patient… I think going on a tour, the artwork, everything has to connect. So we'll wait until that's possible again, and then we'll put out the album."

Asked if KREATOR will once again work with producer Jens Bogren, who helmed "Gods Of Violence" and 2012's "Phantom Antichrist", Mille said: "At this point, it looks like we're working with Arthur Rizk [CAVALERA CONSPIRACY, CODE ORANGE, POWER TRIP]. That's what we have planned at this point. And I'm kind of exchanging demo tapes and discussing recording techniques [with him]. So, yeah, it looks like we're working with Arthur."

KREATOR's next album will mark the band's first with bassist Frédéric Leclercq, who joined the group in 2019.

Last September, KREATOR guitarist Sami Yli-Sirniö described the sessions for the band's new album to Italy's Poisoned Rock as "a lot of fun," adding that the "mood" in the band "is great. And the general vibe and the atmosphere is very good," he said. "[These are] creative times for KREATOR at the moment."

In March 2020, KREATOR surprise-released a new single, "666 - World Divided". The song was produced by Andy Sneap and Markus Ganter and was recorded at Hansa Tonstudios in Berlin, Germany.

KREATOR played its first show with Leclercq in October 2019 in Santiago, Chile.

KREATOR released a new live set, "London Apocalypticon - Live At The Roundhouse", in February 2020 via Nuclear Blast. The effort was professionally filmed and recorded on December 16, 2018 at the Roundhouse in London, England.