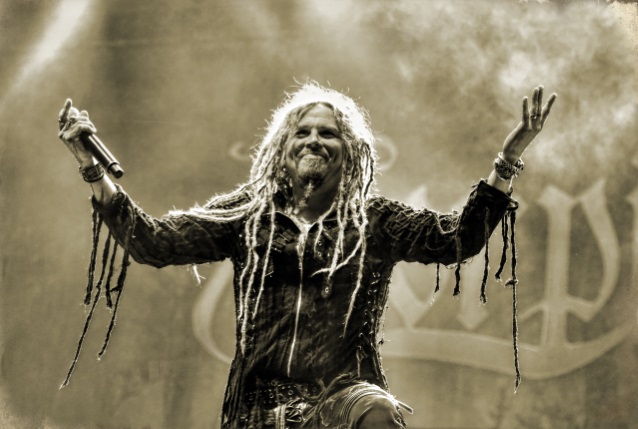 Founding member Jonne Järvelä commented: "We've never been as satisfied with a final result as we are with 'Kulkija'. We tried to keep it very natural, and that's what you'll soon be able to hear clearly. Like the wanderer, this album is a journey, one that makes you feel good. Stay tuned!"

Järvelä told The Moshville Times that "Kulkija" cannot be compared to any of KORPIKLAANI's previous records. "It is actually a totally new kind of KORPIKLAANI album," he said. "We have a new producer and a new guy who mixes the album. There are 14 songs, so the format will be completely different but maybe there'll be something similar on some songs as well."

Added violinist Tuomas Rounakari: "It will have the music of KORPIKLAANI, it will sound like KORPIKLAANI and it will feel like KORPIKLAANI, but I feel there's a clear continuation from 'Manala' [2012] to 'Noita' [2015] and from 'Noita' to this album. It's really a feel-good album. There's the strong feeling of the stories on most of the songs, which is really important, and I guess that from playing, it's a much more natural feel-good. It's less produced but more musical. That's one way to look at the music. To me, a lot of albums are over-produced. They are over-produced to the point that the music is not alive anymore. Like you can put in the song everything so that it'll be exact technically, in the intonation and all… It ends up sounding like a machine."

KORPIKLAANI will celebrate the album's release with a Russian tour, which will take them through 13 cities in 16 days.