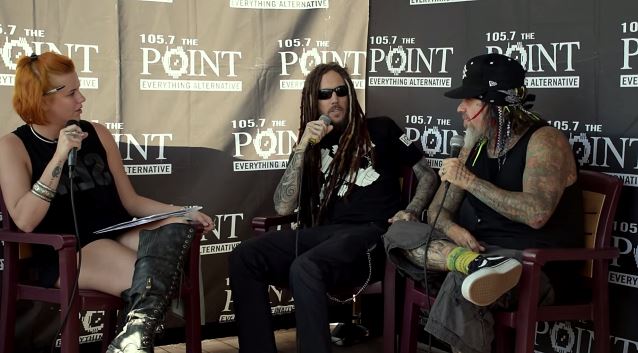 Ashley "Lux" Elzinga of the 105.7 The Point radio station in St. Louis, Missouri conducted an interview with KORN guitarist Brian "Head" Welch and bassist Reginald "Fieldy" Arvizu at July 16 Maryland Heights stop of the Rockstar Energy Drink Mayhem Festival. You can now watch the chat below.

As previously reported, Welch and Arvizu are featured in a new trailer for an upcoming movie called "Holy Ghost", which aims to prove that the Holy Spirit is real. The film is a project of Wanderlust Productions, an independent company committed to "advancing the kingdom of God through the creative use of media and storytelling."

The company web site says that the film "will take [director Darren Wilson] and his team around the world as they go in search of the nature and evidence of the Holy Spirit. They will explore the role of the Holy Spirit in the arts, ministry, and the Christian life. But as with all of Darren's films, it will be the encounters of ordinary people with the God of the Bible that will take center stage."

"Holy Ghost" is set to premiere via digital platforms on August 9.

Welch left KORN in early 2005, at the same time announcing that he kicked his addictions to drugs and alcohol by becoming a born-again Christian.

He said a while back that despite having money and fame, he was never truly happy. "I thought I had everything, you know. I had money — money was pouring in," he said. "Women. And money, to me money was everything. But through the years, it just, I found that it's nothing actually, because money can't buy happiness. Happiness just comes from one place, and that's the Lord."

When asked about his faith in a recent interview, Welch said, "I hate religion — I don't talk about religion at all — but the relationship through Christ is what I found. And I'm totally satisfied."

Arvizu issued a memoir in 2009, titled "Got The Life: My Journey Of Addiction, Faith, Recovery And Korn", which detailed his struggles with addiction and how he became a born-again Christian to get his life together and get sober.