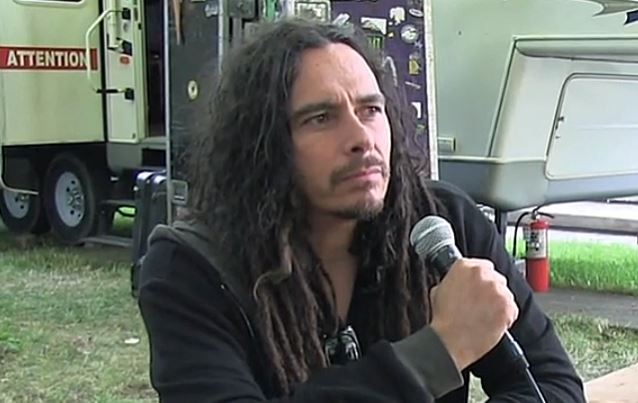 Speaking about KORN's influence on the heavy music scene of the past couple of decades, Shaffer said: "When we're doing festivals like this and I have other bands, or other musicians, come up to me and say, 'You had a big influence on me playing guitar,' or, 'You had an influence on our direction,' or whatever, then it starts to be, 'Wow, that's really cool.' Then you start to realize the impact that you made, and [you feel] the gratitude, because we still get to do it — we still get to create and reinvent ourselves on each album. But it's still a challenge, man. And then now, with the record industry changing, you're trying to find new avenues to discover new music from bands. Even [for] established bands, it's tough."

Welch was asked if some recent performances of KORN's 1994 self-titled debut in its entirety had led the band back to a heavier sound. He replied, "I think it's helped being on the SLIPKNOT tour last year and seeing the crowd and just seeing Jonathan [Davis, singer] lead the arena in all the arenas we played. I think it sparked and reminded everybody in the band what KORN started out to be."

KORN has booked a fall North American tour on which the band will perform its debut album in its entirety at every stop. The trek kicks off on October 1 in Chicago, winding down a month later on October 30 in Oakland.