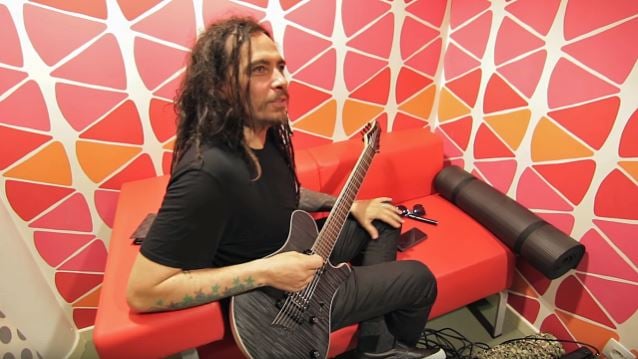 On July 16, Brock of the Rock 107 WIRX radio station conducted an interview with KORN guitarist James "Munky" Shaffer at the Chicago Open Air festival at Toyota Park in Bridgeview, Illinois. You can now listen to the chat in two parts below.

Asked how KORN manages to stay inspired to make new music twelve albums into its career, Munky said: "The inspiration for us is a constant stream of creative… wherever we pull it from. It may or may not be good at the time, but that's for us to decide later, I guess.

"We compiled a lot of material for [KORN's upcoming twelfth album, 'The Serenity Of Suffering'] and kind of looked at in retrospect to how our previous albums… how did it play a part? Was it touching on some of the things that maybe we haven't touched on? Some of the heavy guitar stuff we wanted to bring back into the forefront. It's just going through that stuff and meticulously kind of picking it apart. And I think we took a long time to do that. We actually started writing a lot of the material with eight-string guitars, and that kind of didn't pan out the way Head [guitar Brian Welch] and I thought it was going to. But we got a lot of great stuff, and we transposed a lot of that music to our seven-string sound, and it made more sense; it sounded more like KORN at that point."

He continued: "On the last couple of records, the couple of records before Head came back to the band, maybe we were kind of veering to the left a little creatively, giving that creative control… [We thought], 'Okay, let's kind of get this ship back on course a little bit,' and still feel current, I guess, with our songwriting, and the way the songs feel, with what's going on in music now, but still maintaining the integrity and heavy guitars of what KORN fans are used to."

Regarding how the members of KORN balance trying to please casual and hardcore fans at the same time while also keeping themselves happy creatively, Munky said: "It's tough. I think it's sort of, like, you have to trust your gut and just be, like, 'If we like it… If the five guys in this room like it, we have to go forward and move with it.' But also the technology gets better and makes you sound better. And it can help and hurt your sound, because you don't wanna rely on it too much, but you do want to have that polished sound and use it in that way. But you don't wanna have the computer doing the songwriting for you where you're putting the pieces of the puzzle, a copy-paste kind of thing. And that's something we definitely kept in mind when we were writing. We tracked the record, the songs, from the beginning to the end, which was an old-school method of [doing it]. And I think that's why the songs on this record feel alive; they feel very organic. They weren’t put together in some computer and now we're trying to figure 'em out. It's an old-school way of doing it."

"The Serenity Of Suffering" will be released on October 21 via Roadrunner. Grammy-award winner Nick Raskulinecz, who has worked with FOO FIGHTERS, DEFTONES and MASTODON, produced the disc. The follow-up to 2013's "The Paradigm Shift" features a guest appearance by SLIPKNOT frontman Corey Taylor on the song "A Different World".

KORN's tour with ROB ZOMBIE, "Return Of The Dreads", kicked off July 19 in Englewood, Colorado, and will wind down on September 3 in Bristow, Virginia. The band will hit the road again with BREAKING BENJAMIN on September 24 in Fargo, North Dakota, for the "Nocturnal Underground" tour.