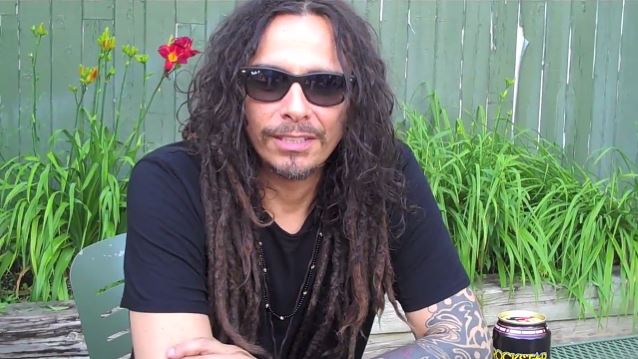 KORN launched a North American tour earlier in the month on which the band is performing its self-titled 1994 debut album in its entirety at every stop to commemorate the 20th anniversary of its release. The trek kicked off on October 1 in Chicago, winding down a month later on October 30 in Oakland.

KORN guitarist James "Munky" Shaffer told NorthJersey.com about the band's pioneering first effort: "We set out to create something that was super raw and emotional with no filter. We didn't care about being on the radio. None of that mattered. We just wanted to create an album that was pure."

He continued: "We're extremely proud of what we created. As the recording process progressed, we realized it wasn't like anything we had heard.

"That album really was a gateway for many people who didn't necessarily like heavy bands to explore heavy music. We pulled our inspiration from a variety of bands like SEPULTURA, FAITH NO MORE, RAGE AGAINST THE MACHINE and the RED HOT CHILI PEPPERS."

A previously unexplored mixture of bass heavy musicianship sprinkled with electronic effects and hip-hop influences, KORN's debut is credited with launching the nu-metal movement of the 1990s, in the process influencing a host of other bands like COAL CHAMBER, SEPULTURA, MACHINE HEAD and LIMP BIZKIT. Shaffer admitted to NorthJersey.com: "At first we didn't like that all these bands were coming out with a similar sound. It was a sound we had worked on and held very close. It took about three or four years to start thinking, 'This is kind of cool that other bands are doing it. It's flattering.'"