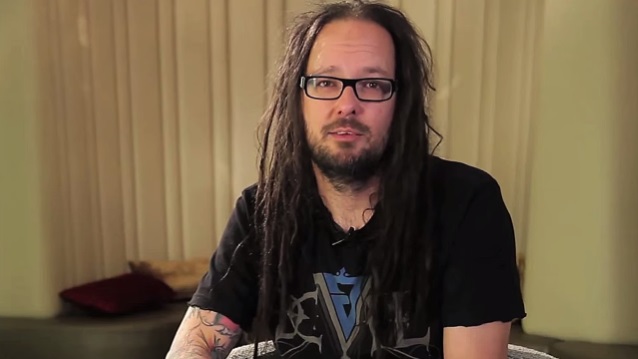 While awarding the Medal Of Honor at the White House on Thursday (November 12) to a former Army captain who tackled a suicide bomber in Afghanistan and was badly injured in the August 2012 attack, President Obama recounted a moment during Florent Groberg's recovery when he thought he was hallucinating because KORN singer Jonathan Davis appeared at his bedside.

The President then said: "Flo thought, 'What's going on? Am I hallucinating?' Today, Flo, I want to assure you you are not hallucinating. You are actually in the White House. Those cameras are on, (and) I am not the lead singer from KORN."

Groberg, who needed 33 surgeries to save his leg after tackling the bomber, is the tenth living service member awarded the nation's highest honor for battlefield bravery in Iraq or Afghanistan.

Davis, who happened to be visiting military bases abroad when he met Groberg, told Rolling Stone that he was "shocked and taken aback" by the Obama namecheck. He recalled: "I was asleep and then around six or seven in the morning, my phone starts going off. I look over and someone had just texted me 'The president just said your name during this Medal Of Honor ceremony.' I'm just like 'whatever' and went back to sleep, but [my phone] kept going."

He added: "I couldn't believe it. It's really cool. The President of the United States gave me props for being there for a Medal Of Honor recipient. Groberg went through hell."

Groberg is now medically retired from the Army. Three service members and a foreign service officer were killed in the blast, with Groberg being the only one who survived the attempt at stopping the bomber. He shares the Medal Of Honor with the four deceased military members.

"I talk to a lot of vets who come back and are hurt," Davis said. "They're in disbelief and depressed but happy that they're home. It's amazing just to put a smile on their face."