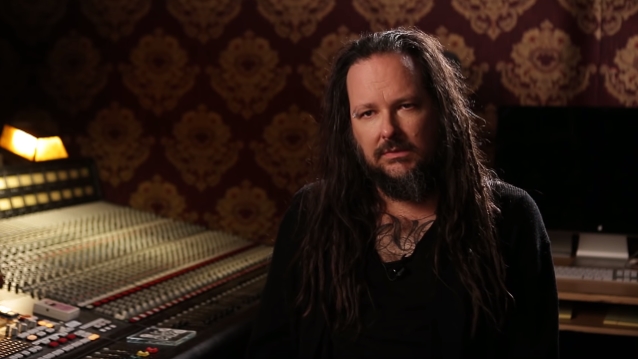 KORN frontman Jonathan Davis was interviewed for the latest episode of "The Jasta Show", the podcast hosted by HATEBREED's Jamey Jasta. You can now listen to the chat using the SoundCloud widget below. A few excerpts follow (transcribed by BLABBERMOUTH.NET).

On his resilience in the wake of adversity:

Davis: "I like doing what I do. I've had a really fucked-up year, so just to be out here [touring with my solo band], it's the way that I cope and it helps me heal. I've got my sons out with me, so I'm more focused on raising those boys right. Music has always been my saving grace — it's always taken me from a really dark place — and by just purging that stuff with music, it helps me get through… It's all I've ever known — since I was little. My parents were in theater and [I was surrounded by] all kinds of music, so I've been going to gigs all my life. So, yeah, the show must go on. You can be a bitch and have a pity party, but that's counter productive. I wanna go on and do what makes me happy for once."

On the making of KORN's upcoming follow-up to 2016's "The Serenity Of Suffering" album:

Davis: "When they write and get together, they send me demos, and if I'm digging it and feeling it, when I'm gone doing [my solo shows], then I'll pick the ones I like. They came out to Bakersfield and worked at our studio, and then I went to Nashville at Nick's [Raskulinecz, producer] studio and I got to actually sit and help write with them, and that was really, really fun. It brings a different dynamic. For years — I don't know how many years — the last three records, I wasn't really that much involved; I couldn't be, 'cause I was dealing with things at home. So I pretty much had to just do as much as I could, but I had to… you know, family first. So I have a little bit more freedom now to be able to do that, and I really enjoy writing with my brothers, and they're really happy to have me back. And I like it. I like when they write by themselves, 'cause they'll come up with stuff… I'll probably steer them in a different way, 'cause I want more mellow, but they like more heavy. So it's a nice… I don't know. It's a nice relationship."

On KORN being considered a heavy metal band:

Davis: "[KORN] is heavy, but I've always said KORN was never really a… I mean, it's heavy, but it's not a metal band. Metal, to me, is a different attitude — it's a whole different thing. I'm glad we're embraced by it. I think it's more of the IRON MAIDENs… That term 'metal'… When we came out, no one knew what the fuck to do with us — they didn't know what to do with us — and it was the metal community that embraced us, and that's where we went. But we were something different to that — we were more of a funky rock… I don't even know what the hell we were doing… alternative — whatever it was. But I'm very grateful to the metal community for embracing us and taking us in. But I never got that — I never understood the metal thing, because metal's really extreme. I mean, I love it — don't get me wrong — but I never felt that we fit that mould. Maybe because we were doing something different. Now that I'm older, it's all good — call us whatever the fuck you want. Thank you for listening still 25 years later… To be honest, I didn't know about MEGADETH or any of that shit [when KORN first started]. I'm like an '80s New Romantic kid — you can tell in my solo music. That's the beauty of KORN — we're all into different shit, and it comes out together and this is what makes KORN. But I didn't listen to [any metal]. I listened to and loved LED ZEPPELIN. And then when I was really young, when MÖTLEY CRÜE 'Shout At The Devil' came out, and DIO 'Holy Diver'… and what else? Some IRON MAIDEN… Right when I started listening to it, my dad grabbed it and burnt the shit, 'cause [he thought] it was Satanic and I was forbidden to listen to it. So that pushed me in another [direction]. [I was, like], 'Well, fuck you, dad. I'm gonna find something else.' And that's when I got into SKINNY PUPPY and MINISTRY and all that Wax Trax shit. And that's when I went that way and [got into] more gothic stuff."

On his need for both darkness and light in order to engage with the experience of life:

Davis: "I love positivity and I like white light, but I also like darkness too — I need both; for me to feel complete and balanced, I have to have both in my life. You just don't let one overtake the other. And I know it's weird to say, but I have a lot of darkness in my life; I like a lot of dark things; I have very, very dark friends; and I'm always really, really peaceful and light. I keep both, and it keeps me balanced. And I don't judge at all. I exist in the middle."

On what scares him:

Davis: "The only thing that scares me is something happened to my children — pretty much. Death doesn't scare me. I mean, it does, just 'cause I don't wanna be robbed of seeing my children grow up. Once I can see my babies grow up and go on and have their lives and know that they're gonna be fine, well, okay, cool… But other than that… I'm trying to think what really, really scares me. Not much. I've seen really a lot — I've seen how dark humans can be. I guess more dark stuff in the spirit realm maybe. 'Cause I've had some bad shit happen to me in my life with that, and it is pretty intense. But again, that's opening yourself up to that and not being prepared for the consequences."

On having contemplated suicide at one point in his life:

Davis: "It's never a fun place, 'cause I've been there. I was completely depressed, but I was not inebriated or under the influence of benzos or all the other things. When you mix alcoholism with depression, it's bad, 'cause alcohol is a depressant to begin with, or Xanax or any of those drugs; it gives you liquid courage. When I'm dealing with my depression, I'm thinking in my head, 'You know what? If I killed myself right now, my family would be fine because I have a fucking nice life-insurance policy. They'd probably be better off, because I'm not being a bummer. They'll get over it; they'll have a lot of money; they'll be better. And I'll be happy; I'll be gone.' So this is the shit that's going on in your head. That's what you're telling [yourself], 'cause you're sick. Add alcohol to that, or drugs. Then you're, like, 'Okay, I'm doing it.' And then you do it… I never look down on someone who kills himself, 'cause I've been in that place and you just make up lies in your head. 'My kids will probably be better, and my wife will be better, and everyone will be happier, because I'm gone and I'm not being a burden.'"

After marrying Jonathan in 2004, Deven and the singer had two kids together, Pirate and Zeppelin.

Jonathan is continuing to tour in support of his "Black Labyrinth" solo album, which came out in May.