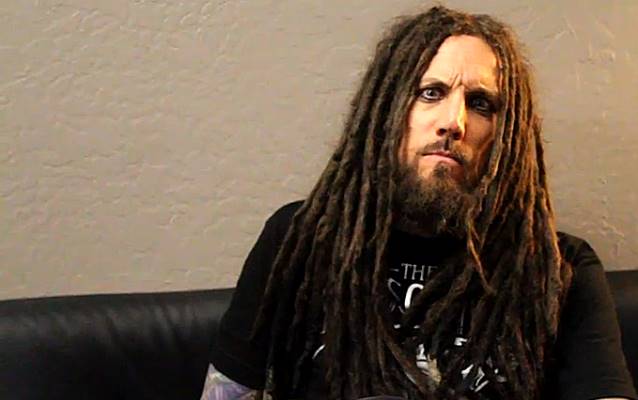 KORN guitarist Brian "Head" Welch wants the band's next effort to be "heavier" and "more uptempo" than 2013's "The Paradigm Shift", but is unsure that he will "get [his] wish."

Speaking to PureGrainAudio.com about KORN's plans for the next CD, Welch said: "We're talking at the moment about taking a couple of months off and going in straight away as it will probably take the rest of the year for us to do the album."

He continued: "[There isn't any new music written yet], but I wanna go heavy though. I hope I get my wish. [Laughs]"

Asked if revisiting the material from KORN's debut album while the band is celebrating the 20th anniversary of the disc's release has reignited those fires to play that kind of raw, brutal music again, Welch responded: "I'm hoping. We won't go back and do that record again, you know, obviously, but I was telling [KORN singer] Jonathan [Davis] that I wanted to do some more faster-tempo stuff again."

He continued: "When KORN wrote songs, we would think about the live show, because… I think you can write good songs all day long, but if they're not fun live, then you're stuck playing them for years.

"KORN used to always think, 'What would the crowd be like if we played this?' and so I want to do that on this new record. I don't want to go out there and play songs over and over that are boring."

Welch also talked about his goals for the future. He said: "I'd like to put out a heavier, more uptempo record with KORN and tour it hitting all the spots but not tour it as heavily. Do the U.K., do Europe, take time off, two tours in America."

He continued: "My kid is grown up now, [and] the [other] guys in the band have kids. It's not about touring so heavily anymore. As for more personal goals, I want to go deeper into things of the spiritual realm and my goal is to be one of the happiest people on the planet. I wanna bring smiles to anybody that I can."

KORN guitarist James "Munky" Shaffer last year spoke to Pop-Break.com about how reconnecting with Welch for "The Paradigm Shift" album after an eight-year break might influence KORN's approach on the next CD. He said: "Head and I were talking [earlier today] about how we really want to keep the melodic element of what we captured on last record but really expand on the heavy riffs and get a bit dirtier. Maybe a little longer songs with longer intros, and a little more math rock, not prog-rocky but maybe some slower tempoed grooves that are 7-8 or 3-4s timing and stuff like that."