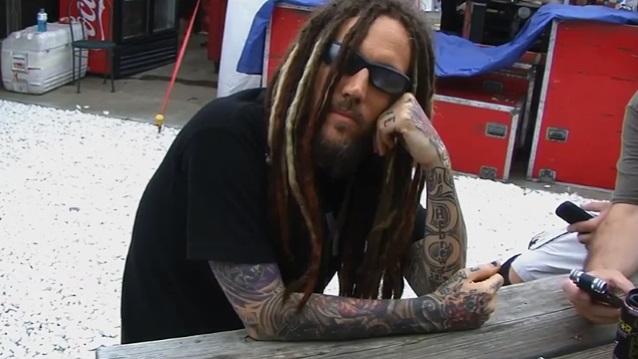 During a roundtable discussion with the media at the Pittsburgh stop of this summer's Rockstar Energy Drink Mayhem Festival, KORN guitarist Brian "Head" Welch revealed more details about his forthcoming fourth book, which is tentatively due in 2015. "The working title is 'With My Eyes Open', and it's about the eight years that I was away from KORN [between 2005 and 2013] to the road back to KORN," he said. "And it's crazy. I'm telling you… I found spirituality and I did have encounters with Christ, but I [spent time] around some wacky people too. And I went through some crazy stuff with, like, court cases, lawsuits… all this crazy stuff, man. So I'm writing about all that…"

Welch also spoke about KORN's touring plans for after Mayhem, explaining: "We've got a possible big tour in the fall, too, in the U.S. Hopefully we can announce that pretty soon. But after that, maybe take six months off with KORN. I don't know… I would like to. I just think it's good to pull back a little bit and then come back out. But we'll see."

As for the future of Welch's side project LOVE & DEATH, he said: "I would love to finish [a new] album or at least get really far [into the songwriting process], you know. Because once you get the ideas [together], I can just be working on the bus on lyrics and stuff like that and melodies, and it can come together pretty quick. So yeah, I hope to do that."

When asked about his faith in a recent interview, Welch said, "I hate religion — I don't talk about religion at all — but the relationship through Christ is what I found. And I'm totally satisfied."

LOVE & DEATH's debut album, "Between Here & Lost", was re-released in September 2013 as a "deluxe" edition containing a brand new track, "Empty", along with remixes of the songs "The Abandoning" and "Meltdown" by the CD's producer, Jasen Rauch (RED, BREAKING BENJAMIN).