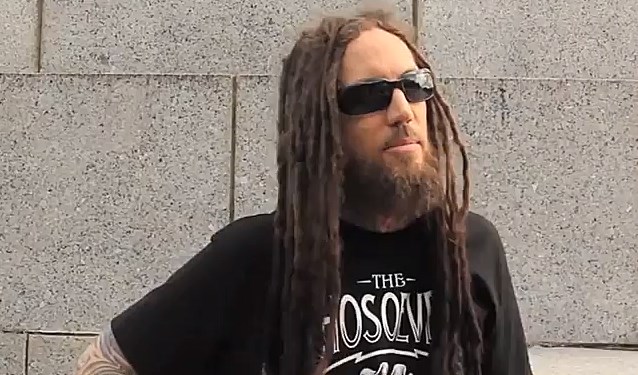 KORN plans to celebrate the 20th anniversary of its debut album by performing the disc from start to finish at selected shows on its upcoming tour itinerary.

The actual 20th anniversary of its release was October 11.

KORN will head out on tour as special guests of SLIPKNOT on the latter's "Prepare For Hell" tour, which begins on October 29 in El Paso, Texas.

Speaking to Jack Antonio, KORN guitarist Brian "Head" Welch said about the 20th anniversary of the band's debut LP (hear audio below): "Yeah, it's pretty crazy. I don't feel like it's been 20 years, but it's been 20 years.

"A lot of that stuff that Jon [singer Jonathan Davis] wrote about were wounds from his soul, and the first album, especially, it was real. I sat there and watched it happen in front as we were recording these songs. That busted open the door for people to be emotionally raw and real. And a lot of bands followed after that.

"Yeah, it's a cool celebration, and I'm gonna be stoked to be a part of it."

KORN will release a limited-edition 300-page hardcover book including photos from the archives paired with brand new notes and commentary from the members. From the stage to the dressing room to the recording studio, you’ll have unlimited access to everything that went into the band’s career so far.

Pre-order it first along with lots more on Pledge Music.

As previously reported, former KORN drummer David Silveria posted a message on Facebook in which he thanked the band's fans on the 20th anniversary of the release of their self-titled debut album, while also apologizing that he won't be able to celebrate by performing on the group's upcoming tour. Silveria wrote, "To all the KORN fans around the world, I want to thank you with all of my heart for all of the success. Without the fans, KORN would just be a hobby."

He continued, "As we celebrate the 20th anniversary of our debut release, I can't believe it's been 20 long years. I'm sorry to all of the fans that I couldn't be there on tour to celebrate the anniversary, but that's just the way it goes."

Silveria was the second member of KORN's original lineup to depart, leaving in late 2006. Brian "Head" Welch exited the group in 2005 and continued working as a solo artist until rejoining KORN last year. Silveria retired to Huntington Beach, California and opened a restaurant.