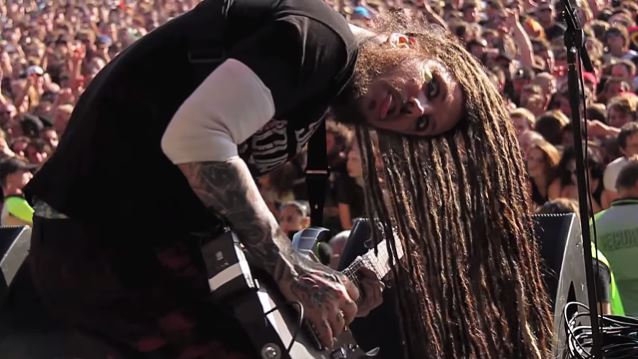 KORN guitarist Brian "Head" Welch was interviewed on "The Jesse Lee Peterson Radio Show" back in September. You can now listen to the chat in the YouTube clip below.

Welch, who left KORN in 2005 after he converted to Christianity and got off drugs, was asked how he knows that he has "the Holy Ghost." He responded: "Well, I'm telling you, for a person that's done drugs for a lot of years, and just to have the Holy Spirit come into you and fill you, it's like the best high ever. It's pure love from God and you can actually feel that love. And it's getting stronger, over the last ten years. I don't know… You're totally satisfied in life and you don't want anything more. And my heart's at peace. I wouldn't have believed it if I didn't experience it. I chose to believe it, actually, first, before I experienced it, but once I walked into it and I started experiencing it, I'm just totally, totally satisfied. There's nothing like it."

Asked if the Holy Ghost is something that's already in us, or if we have to ask for it and receive it, Welch said: "That's kind of a theological debate, maybe, but I believe that God gives breath to every person, but we have to ask to receive the Holy Spirit, just to give us the revelation of how much God sustains life and gives us life. And they talk about a filling of Holy Spirit, and that becomes when you start asking and everything. And it's not about religion, it's just about relationships. It's the spirit of Jesus coming into you and living with you. And it's so beautiful, man. It's just beyond anything."

Welch recently spoke with Variety about his involvement with the film "Holy Ghost", a faith-based documentary that sets out to prove that the Holy Spirit is real. Welch, a born-again Christian, explained, "'Holy Ghost' is about people inviting God into their heart and life and going out into world and not staying in church judging people and how they live and saying 'prepare for hell.' We want to show people the real Christ."

Welch added, "It's like I've been shown where to get a billion dollars and it's like I can share all the money with everybody else. Celebrities are given a platform and we've got to use it for something, because we're all going to be accountable one day, so it's important to use it wisely."

Welch pursued a solo career for several years before rejoining KORN in 2013 and recording his first album with them in 10 years, "The Paradigm Shift".