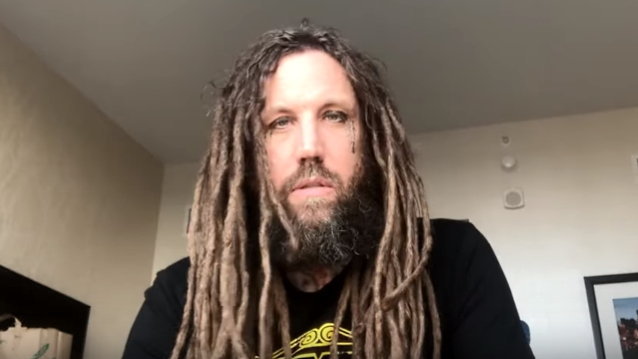 KORN guitarist Brian "Head" Welch has uploaded a new seven-minute video in which he discusses his 2005 conversion to Christianity and the impact his new awareness has had on his life, his family and the influential rock band that he co-founded more than 25 years ago.

In the clip, the musician — whose recently released film, "Loud Krazy Love", documents his struggles with addiction and chaos, meaning and purpose — says: "Over the years, I've had many annoying people tell me, 'You just changed your addiction from drugs to an addiction to your religion.' So let me break it down for you. When you do drugs — a substance like cocaine, for instance — it goes in your nose to the brain, affects the dopamine in your brain, comes down through your body and makes you feel this euphoria or this pleasure and this high. That's a natural way to get high or feel pleasure or a euphoria like that. There's a supernatural way that you can feel that euphoria and that high and that pleasure, and that comes from the spirit.

"There's a scripture in the Bible that says, 'No eye has seen, no ear has heard, no mind has conceived the wonderful things that God has prepared for us,' or prepared for humans," he continues. "Now, people would say, 'Why do you believe the Bible? Why do you believe that? Why would you believe some words by men two thousand, three thousand, four thousand years ago? It's because of the next verse, and the next verse says, 'But God has revealed it and unveiled it to us by his spirit.' So you don't have to wait till you die to see if this is real. That's the point here. That's why I've been walking in this for 14 years plus. I felt that. I was doing lines, I was doing pills, I was doing every drug you could think of, and alcohol, and you name it. And I was looking for this euphoria — to escape. 'I want more. I wanna enjoy life.' It just seemed like I made it to the top of the music business, and it was, like, 'This is it?' It didn't bring me that euphoria. So I wanted more — I wanted it through the drugs. And once I got ahold of this supernatural spirit — this holy spirit is a person, but the substance that comes from him as he comes inside of you, pores into you, it's love. It's divine love. It's pure light.

"How many people have you heard that have had near-death experiences or died and came back that they saw light?" Welch added. "Well, that's why Christ says in the Bible, he's the light of the world, 'cause that's the light. And so he pores the light into you, and you can feel the glory of God in your soul. Deep within the deepest part of who you are, the core of the person of who you are — that's where the pleasure goes."

Welch left KORN in early 2005, at the same time announcing that he kicked his addictions to drugs and alcohol by becoming a born-again Christian. He rejoined the band in 2013.

Both Welch and KORN bassist Reginald "Fieldy" Arvizu have had highly public, though separate, conversion experiences, ones that have been greeted with a certain amount of skepticism.

KORN's new album, "The Nothing", will be released on September 13 via Roadrunner/Elektra. The follow-up to 2016's "The Serenity Of Suffering" was once again produced by Nick Raskulinecz.

KORN kicked off its co-headlining tour with ALICE IN CHAINS on July 18 at Austin360 Amphitheater in Del Valle, Texas.