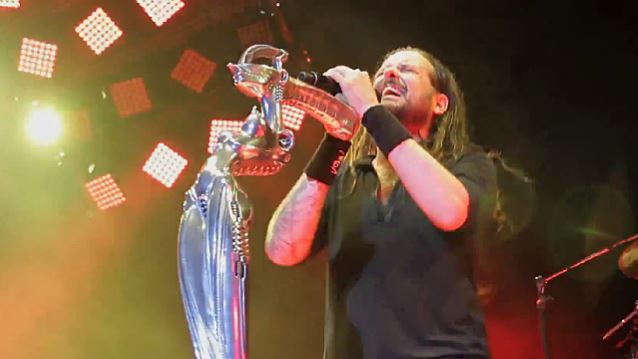 A 50-minute documentary on KORN's appearance at this past summer's Rockstar Energy Drink Mayhem Festival, shot by the band's videographer, Sebastien Paquet, can be seen below.

KORN will release a limited-edition 300-page hardcover book including photos from the archives paired with brand new notes and commentary from the members. From the stage to the dressing room to the recording studio, you’ll have unlimited access to everything that went into the band’s career so far.

As previously reported, former KORN drummer David Silveria posted a message on Facebook in which he thanked the band's fans on the 20th anniversary of the release of their self-titled debut album, while also apologizing that he won't be able to celebrate by performing on the group's current tour. Silveria wrote, "To all the KORN fans around the world, I want to thank you with all of my heart for all of the success. Without the fans, KORN would just be a hobby."

He continued, "As we celebrate the 20th anniversary of our debut release, I can't believe it's been 20 long years. I'm sorry to all of the fans that I couldn't be there on tour to celebrate the anniversary, but that's just the way it goes."

Silveria was the second member of KORN's original lineup to depart, leaving in late 2006. Guitarist Brian "Head" Welch exited the group in 2005 and continued working as a solo artist until rejoining KORN last year. Silveria retired to Huntington Beach, California and opened a restaurant.