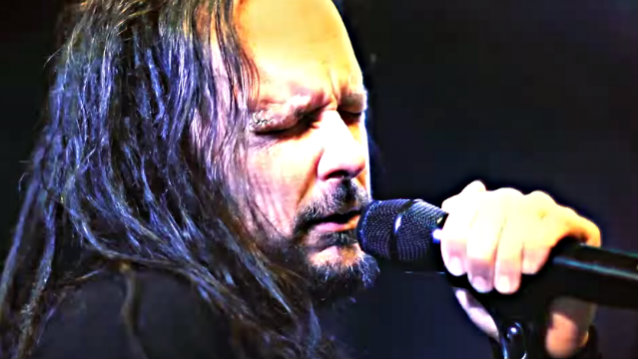 Sara of Philadelphia's 93.3 WMMR radio station recently conducted an interview with KORN frontman Jonathan Davis. You can now listen to the chat using the audio player below. A couple of excerpts follow (transcribed by BLABBERMOUTH.NET).

On KORN's upcoming "Prepare For Hell Tour" with SLIPKNOT and KING 810:

Davis: "I think we're gonna probably do a little bit heavier setlist and just prepare fans for a big ol' party. It's gonna be the exact opposite of what SLIPKNOT brings, which is just really heavy, heavy, heavy, fast metal. We do more of a party-type vibe. I think it's gonna be a good show, 'cause nobody wants to see that twice, you know what I mean? It'll be something for everyone. Something different."

On the musical direction of KORN's next album:

Davis: "We never can tell until we get in a room together. It goes all over the place. When the band gets together and writes… 'Cause we write together as a band, and I write on my own, Head [guitarist Brian Welch] writes stuff on his own. So it just depends. Once we get into a room and go through all that stuff, that's when we know what direction we're gonna go… I'm always [writing and recording music]. [Laughs] I've got a music problem; I'm addicted to music, so I've got a ton of stuff. But we've gotta get all the guys together, 'cause we all live in different places, so when everybody gets in one spot, we start writing actually as a band. We record where we grew up, in Bakersfield. We've got Buck Owens' old studio, which a lot of huge records were recorded out of there, so we really like it there. It's a got a good vibe there."

On how KORN plans to celebrate — both personally and as a band — the 20th anniversary of the release of its debut album:

Davis: "Personally, I don't know how I'm gonna celebate. But as a release, I know we're gonna start doing, on festivals, we're gonna play the first album in its entirety. We're gonna start doing that. We're even gonna play [the song] 'Daddy' [which Jonathan wrote about his painful experience of being molested as a child and not being believed]. And I said I would never do it, but I'm gonna do it anyway. So we're gonna do the complete album in its entirety and then tag on some songs at the end of the show. So it should be pretty cool. But it's gonna be very stripped down. I think we will recapture what we were doing at that time, when we were coming up. It was our first album, we didn't have any production, it was just one backdrop. So I think it'll be kind of like that down-and-dirty, cool, old-school vibe, and we'll do the first record… [We'll start doing that later] this year. Once the 20th anniversary hits [on October 11], we'll start doing it."

On whether he still rejects the "nu metal" label in reference to KORN, which is widely credited for pioneering the genre (encompassing metal bands that came out in the '90s that incorporated different styles into their music, mostly funk and hip-hop):

Davis: "I've always rejected the fact that us getting pigeonholed into some kind of genre that we helped create, they said. It seems like when a band comes out and we do something new and something different, that's all great. When a whole bunch of bands jump on the bandwagon and start copying what that one band did, then it gets called something. And those bands are cheap knockoffs of what the original thing was. So, to me, that's why I never liked the 'nu metal' term. You don't call the RED HOT CHILI PEPPERS a funk band. You don't call METALLICA just a thrash band. These are bands that have been around over 20 years that have paid their dues and have made amazing music that lots of people have ripped off and they get pigeonholed into these little genres [people] make up. But, to me, that's why I've always… I never liked it. But that's my personal opinion, I mean, if people want to call us that, go ahead — I don't care. That's just for me, that's just the way I look at it. So take my opinion with a grain of salt, I guess."