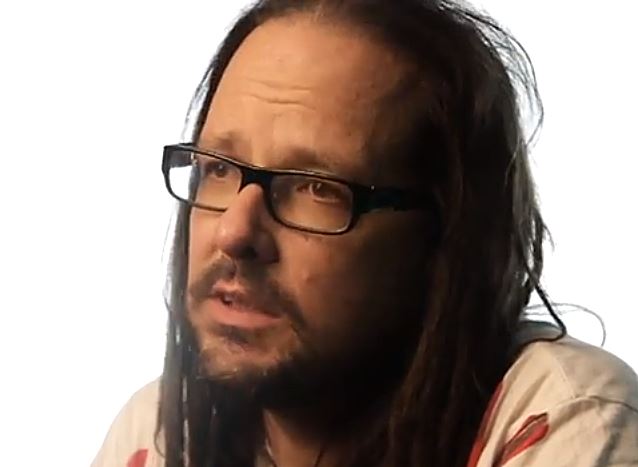 Mike Hsu of the Worcester/Boston, Massachusetts radio station WAAF recently conducted an interview with KORN singer Jonathan Davis. You can now listen to the chat using the audio player below.

The official video for "Never Never", the first single from KORN's upcoming 11th studio album, "The Paradigm Shift", can be seen below. The track arrived online and at radio stations on August 12 and Jonathan Davis shared some insight with The Pulse Of Radio into what it's about. "I mean, it's about relationships," he said. "it's about anything. It seems like you try and try to make things work and you repeatedly fail at it. It's just like, throw your hands up in the air and give up, and it's that kind of vibe. I was feeling that towards life, basically."

"The Paradigm Shift" is due out on October 8. The follow-up to 2011's "The Path Of Totality" features the return of guitarist Brian "Head" Welch to the lineup after more than eight years away. His last album with the band was 2003's "Take A Look In The Mirror".

Davis told The Pulse Of Radio what the experience was like having Welch back in the studio, making this record extra special.

"'Untouchables' used to be my favorite, but this one's mine now," he said. "You know, it's just all those years of work and being able to be in a band this long with the guys. And having Head back bringing, you know, that old chemistry back with him with Munky on the rock side and I was on the electronic side. It was good having the compromise on both sides. It was just good for the creative process, I think."

Other songs on the new set, which was recorded with producer Don Gilmore (LINKIN PARK, BULLET FOR MY VALENTINE, LACUNA COIL) at Buck Owens' studio in KORN's original hometown Bakersfield and at Los Angeles's famed NRG Recording Studios, "Prey For Me", include "Spike In My Veins", "Mass Hysteria", "Paranoid And Aroused" and "Victimized".

The deluxe version of "The Paradigm Shift" will contain two bonus tracks and a 60-minute documentary chronicling Head's return to the band produced by the band's behind-the-scenes "filmographer," Sebastien Paquet.

In 2014, KORN will celebrate its 20th anniversary as recording artists.

Davis also revealed that he is doing just fine after discontinuing the use of anti-anxiety medicine he had been taking for many years.

KORN has unveiled the lineup for its one-day edition of the revived Family Values festival. This year's show, which will take place at the 1st Bank Center in Denver on October 5, will include ASKING ALEXANDRIA, HOLLYWOOD UNDEAD, MACHINE GUN KELLY and BEWARE OF DARKNESS in addition to the headliners.

Davis said in a statement, "We wanted to celebrate our new album release in a big way since Head is back and since this record means so much to us. What better way but to bring back Family Values and the Korn Kage for one big fuckin' special night!"

The Family Values show will take place right in the middle of KORN's upcoming North American tour, which launches on September 26 in Philadelphia.