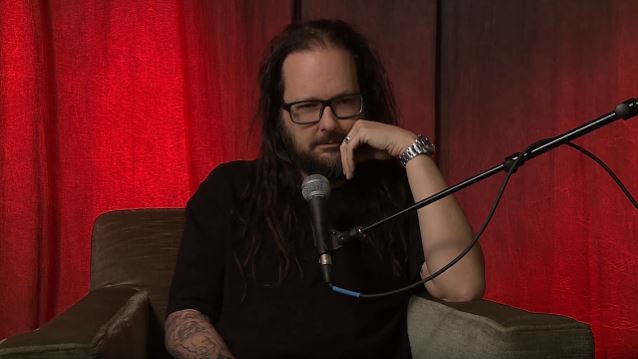 KORN frontman Jonathan Davis came into the "Nights With Alice Cooper" studio to answer a list of questions known as the Proust Questionnaire, made famous by French author Marcel Proust. Watch the clip below to find out what Jonathan admires in men and women, whom he would talk to from all of time and his darkest depths of misery.

Due on October 21, KORN's new album, "The Serenity Of Suffering", marks the band's return to Roadrunner, which previously released 2010's "Korn III - Remember Who You Are" and 2011's "The Path Of Totality". The follow-up to 2013's "The Paradigm Shift" was helmed by Grammy Award-winning producer Nick Raskulinecz, who has previously worked with FOO FIGHTERS, DEFTONES, MASTODON and RUSH, among others. The CD features a guest appearance by SLIPKNOT frontman Corey Taylor on the song "A Different World".

KORN has just hit the road with co-headliners BREAKING BENJAMIN for the "Nocturnal Underground Tour", which kicked off on September 24 in Fargo, North Dakota and will run through late October.