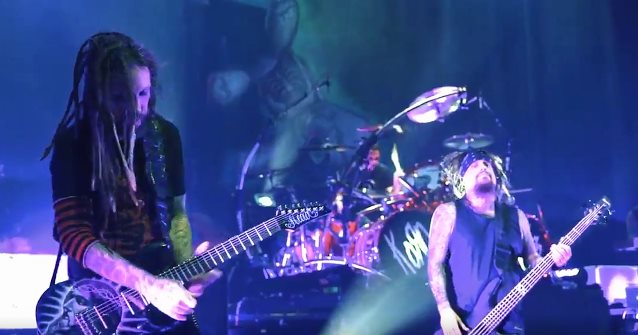 The special performance for SiriusXM featured KORN performing songs from their new studio album, "The Serenity Of Suffering", which was released on October 21, as well as songs from their twenty-plus-year career.

The private performance aired live on SiriusXM's Octane, channel 37, and through the SiriusXM app on smartphones and other connected devices, as well as online at siriusxm.com.

Official video footage of the "Insane" performance from the Ace Hotel concert can be seen below.

The follow-up to 2013's "The Paradigm Shift", "The Serenity Of Suffering" was helmed by Grammy Award-winning producer Nick Raskulinecz, who has previously worked with FOO FIGHTERS, DEFTONES, MASTODON and RUSH, among others. The CD features a guest appearance by SLIPKNOT frontman Corey Taylor on the song "A Different World".