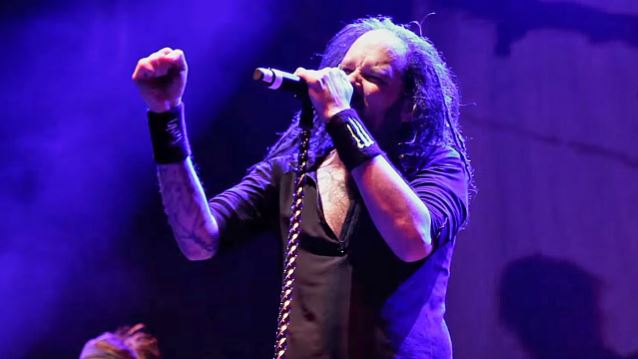 In the three-minute video below, the members of KORN recall writing the song "Faget", from their self-titled debut album, at a house on Orange Street in Huntington Beach, California. The band's lead singer, Jonathan Davis, had just joined the group after quitting his previous job as a professional embalmer at a funeral home.

KORN guitarist Brian "Head" Welch says: "[Jonathan] moved in with us, with his girlfriend, and I remember sitting in the room he rented. I had my guitar in there and I wrote the riff. We just came up with the song 'Faget' right then and there. It was the very beginning."

Davis added: "That song I wrote about being picked on as a kid. In high school and junior high, I was a very feminine dude" who used to wear makeup and loved DURAN DURAN. "I wasn't gay, but people liked to assume that I was gay and call me 'f****t.'"

KORN bassist Reginald "Fieldy" Arvizu said: "['Faget'] is just 'fuck you, motherfuckers' [laughs] to all these people who teased us. So it feels good; it's like payback."

Davis told The Pulse Of Radio not long ago how he thinks KORN has changed in the more than two decades since they recorded their debut. "When we did the first KORN record, the self-titled, we were kids, man. We were just crazy-ass kids, getting drunk every day, just making music, living a dream and it was just insanity. And which I loved — I don't regret it one bit. But now I think where we're at 20 years later, I think it's more about making music and impacting people's lives and helping people."

It went on to sell more than 10 million copies worldwide and featured the band's first classic, "Blind".