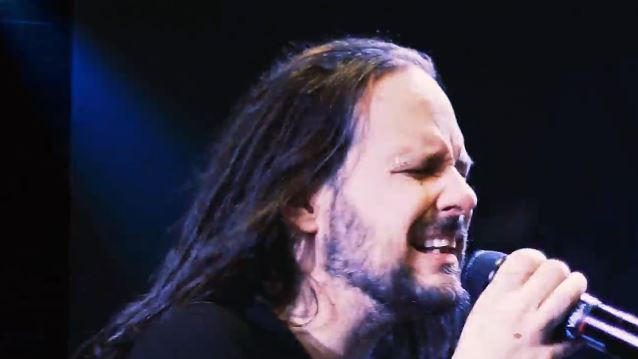 KORN has issued a live video for the song "Hater", the first clip from the "The Paradigm Shift: World Tour Edition". "Hater" is the lead bonus cut from the the special edition, which adds three studio tracks and six live cuts to last year's No. 8-debuting LP. Singer Jonathan Davis told The Pulse Of Radio that "Hater" was put together via long distance. "I did it here at home in Bakersfield, at our studio that we have, with [producer] Don Gilmore," he said. "He came in and me and him just got in there and when it was done, I sent it to [guitarists] Munky and Head and they did their guitar stuff on it, and Fieldy put his bass tracks and Ray [Luzier] played drums and it was done. And it's really good."

The video was shot at concerts all over the world with much of the footage coming from shows in Moscow, Texas and Switzerland.

The band said in a statement, "In the past year we've done over 75 shows in 21 countries. We wanted to share the experience with all the fans who couldn't make it, so we took all of this footage we had from these shows and put it all together. The great crowds of KORN fans everywhere is what makes it special for us."

Davis told The Pulse Of Radio that "Hater" is a direct rebuttal to the kind of person described in the title of the song. "Everybody has a hater," he said. "Everybody has someone that hates on you because you have something they want. And it's really, like, the first empowering song I've ever wrote where it's just blatantly telling you — I mean, the lyrics are: 'You can't bring me down/I've already had my life turned upside down/I ride a downward spiral round and round/But I keep flying, I keep fighting/You'll never bring me down.' That's like the most positive shit I've ever wrote. And it's so different. Everyone that's heard it loves it."

The new version of "The Paradigm Shift" came out last month and features another new studio cut, called "The Game Is Over", as well as live tracks recorded all over the world.