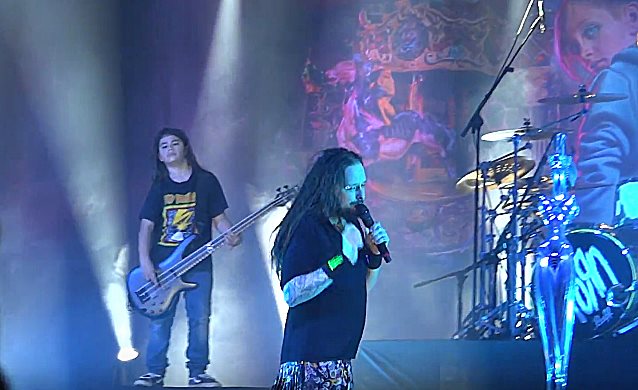 KORN guitarist James "Munky" Shaffer spoke to NME about having Tye Trujillo, the 12-year old son of METALLICA's Robert Trujillo and member of NorCal group THE HELMETS, filling in on bass for the band's South American tour after KORN's regular bassist, Reginald "Fieldy" Arvizu, was unable to make the shows due to "unforeseen circumstances."

"It's good, we're having fun! He's having a great time," Munky said. "His dad's out here with us, just hanging out, shootin' the shit and catching up. [Tye] knows like seventeen, eighteen KORN songs, and he knows them really well — it's crazy. All the stops, and the breaks… it's crazy to see somebody that young so talented. He's gonna be a professional musician, and to know that at that early of an age is just inspiring."

Speaking of how the collaboration came about, Munky said: "There was a moment when a couple of the guys from METALLICA and Jonathan [Davis, KORN vocalist] and Fieldy kinda bumped into each other in some airline lounge, and Robert was, like, 'Hey, have you checked out my son playing bass?!' They were watching some videos and Jonathan and Fieldy were, like, 'Woah, he's so good!' When we found out Fieldy wasn't gonna be able to come on this trip with us, he suggested Tye. It's not just some replacement — this is the DNA of Robert Trujillo, one of the greatest bass players on the planet! You can see it — it's crazy how much you see his dad in him."