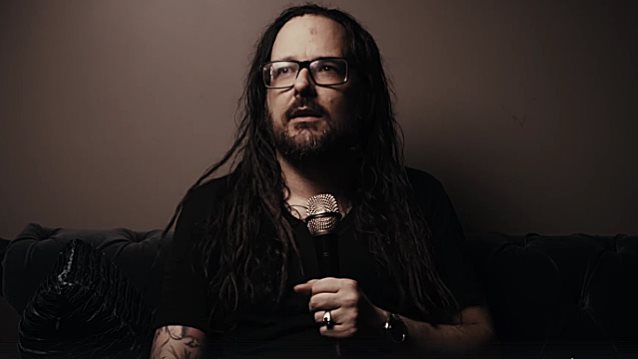 Festival promoters Danny Wimmer Presents (DWP), who are behind the rock fest branding platform called "The World's Loudest Month," have posted an exclusive video interview with KORN singer Jonathan Davis and guitarist James "Munky" Shaffer in which they explain what drives them. You can watch the clip below.

Said Munky: "In the beginning of our career, we were driven, and I was driven, just by inspiration. And that inspiration came from a lot of early artists, bands like FAITH NO MORE, RAGE AGAINST THE MACHINE and RED HOT CHILI PEPPERS. A big influence and a band that really created a lot of drive for us was the band MR. BUNGLE, who a lot of people still don't know. But that was in the beginning of the inception of the band KORN, really. And that sort of inspiration from al those bands, like SEPULTURA and other bands that I mentioned, that really drove us to wanna become something unique like those bands and find something that really connected, 'cause those bands connected with us."

He continued: "When you talk about KORN, I think even if people have never… if they've heard of the band, I don't think they really get it until they see us live, and I think when they see the crowd and the energy, people… Our fans have been so dedicated for so many years and we're so grateful for that. There's no fans like KORN fans. We really appreciate that they have stood behind us for so many years, and we've had our ups and downs. When you fall down, you get back up and you dust yourself off and you look forward and you look for that drive inside yourself. And a lot of that drive comes from those moments on stage when you are connecting with the fans and you have that adrenaline and they see it and you're in the moment and time doesn't exist. And for us, I think mainly that's what drives this band KORN."

Added Jonathan: "The thing that drives me the most is watching the crowd expel their demons and have a good time. I'm going out, I'm going a full hundred and ten percent up there trying to get out and perform and do my thing, and the more the crowd's feeling it, the more it's gonna push me along. So I've always liked that interaction with the fans and the band. For me up there, it's just a big old cathartic… I'm having a therapy session up there, basically. I can get out what I need to get out. I never get tired of it. It never gets boring. It's euphoria, man — it just feels amazing. The lights, the crowd, the heat, feeling the music, all those things come together and make this amazing feeling that's like no other; there's no other feeling like that on the planet."

He went on to say: "Just seeing how much [the fans] are into us and love what we're doing and we mean something to them that helps them in a positive way, I mean, you can't ask for any more than that."

You can see KORN during "The World's Loudest Month" on May 6 at Carolina Rebellion and on May 20 at Rock On The Range. They will also perform on July 15 at the Chicago Open Air.

What Drives You? - Korn