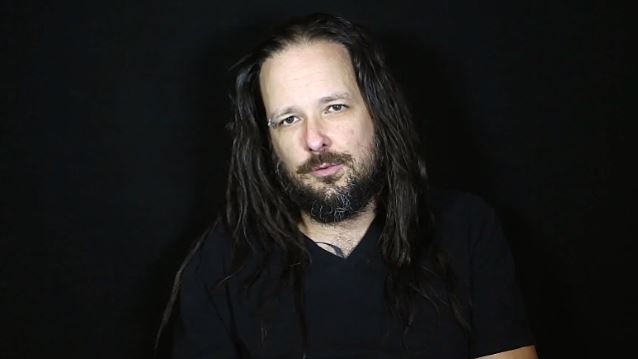 KORN frontman Jonathan Davis has confirmed to Westword that he is working on a project with BIG & RICH, the American country music duo composed of Big Kenny and John Rich. He said: "The BIG & RICH thing, I'm doing a country record. It's a record to commemorate the Bakersfield sound. I'm not going country or touring as a country artist. But it's a compilation of a whole lot of Bakersfield-sound songs that I'm covering with country artists.'

He continued: "It's pretty cool. BIG & RICH did 'Waitin' In Your Welfare Line' from Buck Owens. They're doing the background harmonies and all that shit. It's not like I'm trying to go country, though. I'm from Bakersfield, and it was a huge thing back in the '60s. I wanted to pay homage to that."

Davis also spoke about his collaboration with shock rocker Marilyn Manson. He said: "We're going to get together and write some music and see what happens. I'm going to get back and start working with him on ideas and shit. We hadn't talked for a long time and we recently hooked up again. He was one of my best friends back in the day. We just rekindled our friendship and started talking a lot about doing something together. I love the dude to death. He's a great guy. So I'm down to do something cool."

Manson said this past summer that he was working on "Southern-sounding" acoustic blues material — and that it will feature Davis. Speaking in a Reddit session with fans, Manson revealed that a "completely unexpected" project he hinted at was an unplugged record, explaining, "That's some of the plans of the style of music that I'm working on right now. I don't know what it'll turn into. Some of it will be with Jonathan Davis, I think, because he has plans of doing something similar — something that might even cross over the boundaries of being more Southern-sounding."

Manson added: "I did record [1995 EP] 'Smells Like Children' in Mississippi, which is where the blues came from, so there might be something more acoustic and blues in my future. I like the rawness of it."

Manson and Davis last joined forces in 2002 on a song called "Redeemer" for the soundtrack of the movie "Queen Of The Damned".