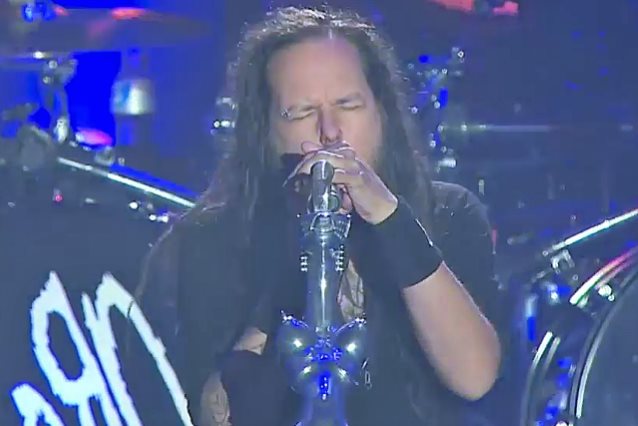 KORN's set at the Rock In Rio Lisboa festival in Lisbon, Portugal last night (Friday, May 27) was halted three times due to technical issues before the band finally gave up after only six songs.

The initial power failure occurred during the opening track of KORN's set, "Blind". The band then left the stage, only to return a short time later to restart the same song. But the power outage happened again, causing the members of KORN to take a break for about an hour while their crew and the festival production team attempted to resolve the issue. At that point, the group returned to play a few more tracks, including a partial cover of METALLICA's "One", after which the power cut out for the third time. This time, KORN left the stage and did not return.

The band later released a statement via social media, saying: "We had a number of issues with stage power tonight and unfortunately couldn't finish our set. Sincere apologies to all the KORN fans!"

The Rock In Rio Lisboa organizers placed the blame for the technical issues squarely on KORN's shoulders, saying that "everything indicates that the problem [had to do with] the band's equipment."

HOLLYWOOD VAMPIRES, the supergroup featuring international film star and musician Johnny Depp alongside Alice Cooper and AEROSMITH's Joe Perry, took the stage right after KORN and reportedly did not experience the same problems as the Jonathan Davis-fronted outfit.

56,000 people were reportedly in attendance at last night's concert, which was being streamed live via the Internet.

You can see video footage of KORN's abbreviated performance below.