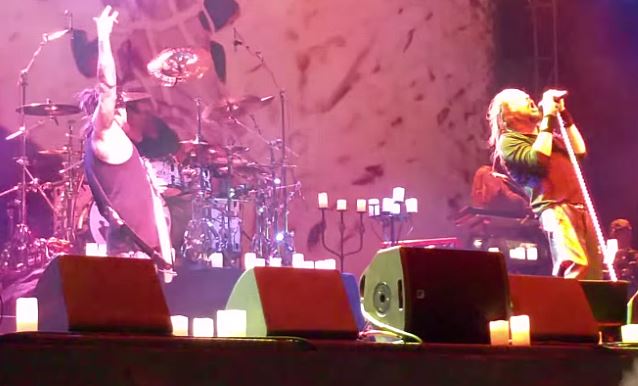 KORN drummer Ray Luzier's drum tech, Abel Vallejo, filled in for Ray during the band's March 17 performance at the Pot Of Gold music festival in Tempe, Arizona so that Ray could be at his wife's side when she gave birth to their second child. Fan-filmed video footage of the performance can be seen below.

"I made amazing friends and golden relationships with all the members and the crew," Abel said. "This truly was a chance of a lifetime to be accepted into the family of such giant talent."

In 2011, Abel left his job with KORN to resume his path to performing and touring, but maintained a strong relationship with Ray, KORN guitarist Munky and the rest of the band. He has since returned to his gig as Luzier's drum tech.

"It [is] a pleasure working for such a monster drummer and amazing guitarist James 'Munky' Shaffer," Abel said. "Ray has amazing work ethic and stage presence. Rain or shine, it's always 200 percent, and his influence will stay with me for the rest of my life. He was, and still is, a mentor and dear friend to me. I cannot ask for a better big brother."

Regarding his playing approach, Abel said: "Being a fill-in, hired man and a session player for [a number of] years is a good thing but to help create a new sound from the ground up is very fulfilling.

"I take a solid approach to my playing and have always taken pride in being a team player in every band I have played for.