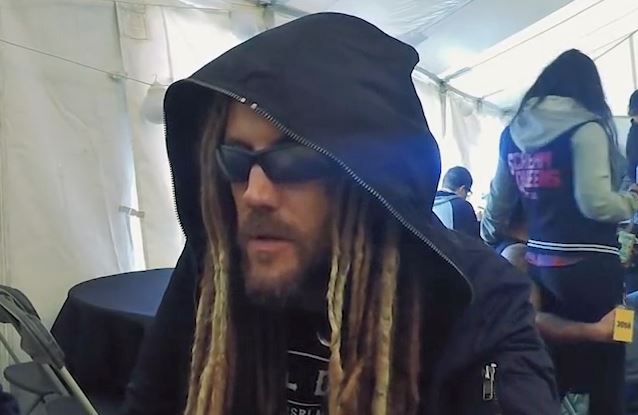 Wes Styles of 97.7 QLZ's "The 3rd String Morning Show" conducted an interview with KORN guitarist Brian "Head" Welch on October 1 at the Sonic Boom festival in Janesville, Wisconsin. You can now watch the chat below. A couple of excerpts follow (transcribed by BLABBERMOUTH.NET).

On what the catalyst is for him to write a new book:

Welch: "I wrote three [books so far], [and] all three times, it was someone coming to me [and] saying, 'You need to write a book.' And I'm, like, 'I don't wanna write a book.' All the time; I'm telling you. The second one was because I was in contract with the first one to write another one, but once I started it, I poured my soul into it. When I do something, I do it a hundred percent, whether it's good stuff or bad stuff, but, luckily, nowadays — thank God — it's good stuff. So I dump my soul, I pour out my soul onto the pages and I share things some people wouldn't be comfortable sharing, because I know that people go through the same thing and they're affected and they're touched positive in that way. So I just look at Christ, for my example — he came and he died for all humanity, so I'm, like, I could freakin' share some painful things. Big deal, right?"

On whether it's true that he does "prayer sessions" with fans on tour:

Welch: "I like to call 'em different things, 'cause I don't want people to get the wrong impression. But, yeah, I come out, I bring a handful of picks, and I tell people that I used to be selfish, I used to go and do my thing backstage, and it was all about me. But now I like to come, and we just ask God, 'Hey, who's hurting out there, maybe, that needs some uplifting?' You'd be so surprised. Crazy things happen to people, and they come to a show to maybe forget about it. And so I tell 'em, I go, 'You guys have been led here — most of you, maybe not all of you…' And the stories I hear are just incredible. There's people in tears, there's people laughing. So I do that. I just tell my story and then I offer up to pray for 'em. And then I hang out and do pictures and give them picks and whatever. I'm not trying to convert anybody; I'm trying to touch lives, and whoever doesn't want it, I love them just the same."

On organized religion being used as a vessel for the wrong reasons:

Welch: "It's crazy, because, again, I go back to Christ, and he came and he was opposing the religious system. That's why they took him and captured him and nailed him on the cross, 'cause he was comin' and saying', 'That's not relationship; that's religion.' And so they killed him. But he laid his life down. And so that's my same thing. When I see it… You can feel it when it's wrong, when it's religion. And honestly, I do my own thing. I'm comfortable being unique, and I just stay away from stuff that doesn't feel right to me."