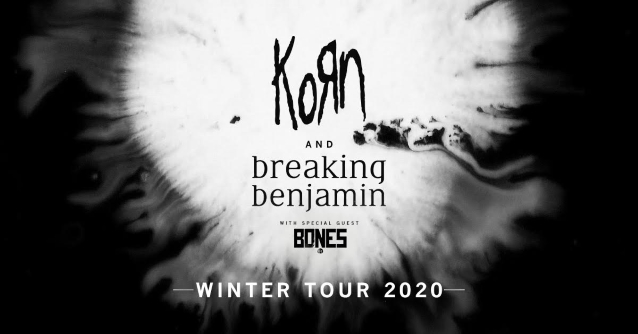 Grammy Award-winning heavyweights KORN and multi-platinum hard rockers BREAKING BENJAMIN today announced their epic tour set for 2020. Fans will have the chance to see two of the biggest forces in rock perform on the same stage each night across North America in the new year. Special guests BONES UK will also join the tour on all dates.

Produced by Live Nation, the expansive 24-city outing will kick off January 23 in Allentown, Pennsylvania and make stops in Montreal, Columbus, St. Paul, Portland and more, before wrapping March 1 in Fresno, California.

In addition to first single "You'll Never Find Me", KORN released the "Cold" and "Can You Hear Me" songs prior to "The Nothing"'s arrival.

A BREAKING BENJAMIN acoustic album is tentatively due before the end of the year. The effort will feature mostly reworked versions of the band's notable hits, including a couple from last year's "Ember" LP, plus one new song.

BREAKING BENJAMIN is continuing to tour in support of "Ember". The disc debuted at No. 3 on the Billboard 200 chart and has spawned off two No. 1 rock radio hits with singles "Red Cold River" and "Torn In Two", marking the band's eighth and ninth No. 1 singles to date.

"Ember" was released in April 2018 via Hollywood Records.