Danish extreme metallers KONKHRA have inked a distribution and promotion deal deal with Target Distribution for the release of their sixth album, "Nothing Is Sacred". The band has also signed a publishing deal with Warner Chapell Music Denmark.

Comments guitarist/vocalist Anders Lundemark: "We are happy to announce the release of our new album 'Nothing is Sacred' is going to be under our own flag Chopshop. We have been under dubious contracts in the past, and negotiating the several deals offered for this one left us with a 'more-of-the-same' kinda feeling. Therefore we decided to pursue the formation of a record label, whose contracts to bands will be 50/50 based and letting the artist keep ultimate control of rights."

Regarding the theme of the new album, Lundemark states, "'Nothing is Sacred' was written during the time of the cartoon crisis, and songs like 'Religion is a Whore' and 'Killswitch' are lyrically direct responses to the attacks free speech has been under in recent years. We attack religion as indiscriminately as we write and record uncompromising extreme metal."

"Religion is a Whore", the new video from KONKHRA, can be viewed below (produced by Anders Koch). The song comes off "Nothing Is Sacred", which was re-recorded last year after the band encountered technical difficulties which forced it to scrap some of the previously completed early tracks. Two other tracks from the CD — "The Promise of Antagonism" and "Hail to the King" — are available for streaming on the group's MySpace page.

Lundemark previously stated about KONKHRA's new material, "'Doctrines of Death' is one of the extra new songs we decided to record. It's about three minutes of 240 bpm (beats per minute) blastbeat. Think 'Dominate' by MORBID ANGEL and you'll know what I mean. Mads [Lauridsen, drums] is dominating these tempos for sure, and it's very refreshing and unbelievably fun to play KONKHRA songs in these tempos. The fastest we did in the past was about 220 bpm. We hope that fans of the fast new-school death metal will give our new shit a chance. We still do the chugga mid-tempos a lot too, but there are three-four songs that take a bow in the MORBID ANGEL, VADER, BEHEMOTH direction."

"Nothing Is Sacred" will be released worldwide on Monday, January 26, 2009.

KONKHRA released its last CD, "Reality Check", in May 2003 through Code666 Records. The album was recorded at guitarist/vocalist Anders Lundemark's own Starstruck Studio and was the group's first since their split with longtime label Diehard Music. 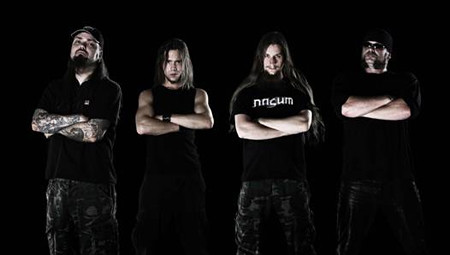