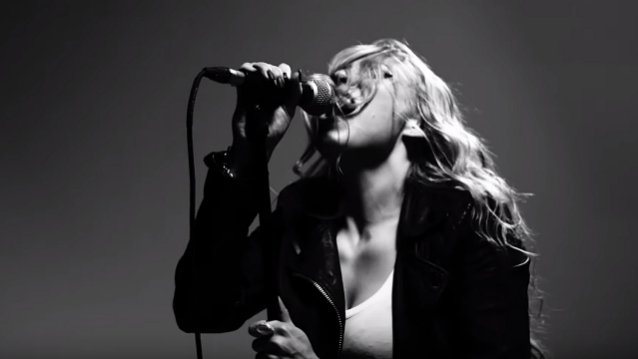 In a brand new interview with Rock Confidential, KOBRA AND THE LOTUS singer Kobra Paige admitted that she finds social media to be an important route of communication for bands looking to connect with their fans but also fears its algorithms don't always allow fans to get the content they want.

Calling social media "a pit of humanity," Kobra said that "it could be utilized for good things and some people do use their platform for beautiful things." But, she added, "I don't think humans, in general, are responsible enough mentally to have this kind of inundation. It's an inundation of delusion all the time and I think it's very unhealthy what has transpired with our self-confidence and self-esteem as social media has really blossomed. I am a huge non-fan and I really have struggled with that aspect of it being such a massive part of promoting your music and bands these days.

"I don't actually know how to get around getting our stuff out to people anymore because there's algorithms," she continued. "It's super twisted up right now. I think it's making a crisis for some genres of music. I find that we're in a state of crisis because of the way things are going right now. We can't even get our shows out to fans that are on our Facebook page without boosting a post. No one has endless bank accounts to pump into ads. You don't wanna even do that, but the fans don't see what we post on our page. It won't show up in their feed. It's a really difficult time. I don't have any tips or tools for anyone because I have figured it out."

Kobra went on to say that what you see on social media is not reality, particularly in the case of Instagram, a platform known for having perfect people with perfect bodies.

"Yeah, that's what I really can't stand about Instagram," she said. "Like it says, it's a place for instant gratification. And absolutely the most comments come in if I post a selfie. That really bothers me. People don't read what is written there half the time. And I've noticed that people on Facebook are a really different demographic than the people on Instagram. It's usually people on Facebook that are reading what you're posting about. It's going to be less traffic, but they're really interested. Whereas on Instagram, it comes with two different parts. The first part cares about why they follow you in the first place — the music. That's mainly why I have social media. That's how it started.

"Universal Music asked me on our second record to get an Instagram because I didn't have one," she explained. "Social media is part of promoting everything. I'm not selling my body or using my face in every single post with Beauty Shot with airbrushed, flawless skin. It's not working out. It's not working out for the Instagram crowd, which is where a lot of kids are living these days. Kids don't need to see that shit because the truth is everyone shits, and they are forgetting that. It really scares me for them."