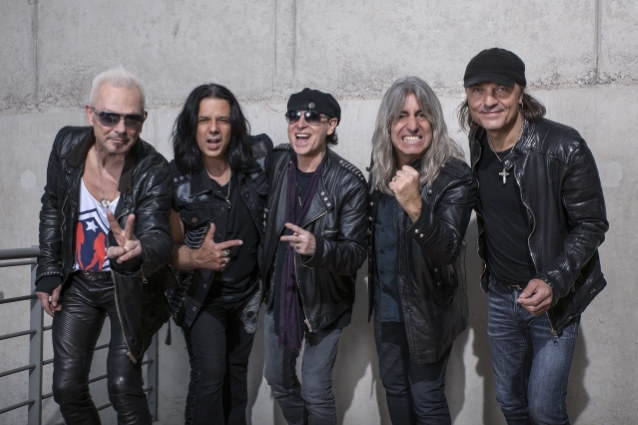 SCORPIONS singer Klaus Meine says that his band "would feel very honored" to one day get inducted into the Rock And Roll Hall Of Fame.

The German hard rockers, who been eligible for the honor since 1997, had been the decade-long international long shot when their 1982 album, "Blackout", blew up Top 10 in the U.S., powered by the No. 1 rock radio track "No One Like You". The band's follow-up LP, "Love At First Sting", two years later soared to No. 6 on the Billboard album chart with triple-platinum sales while delivering a blitzkrieg of rock anthems, including "Rock You Like A Hurricane", "Big City Nights" and the signature power ballad "Still Loving You".

Asked for his thoughts on the Rock And Roll Hall Of Fame and whether he thinks SCORPIONS should finally get the nod, Meine told SiriusXM's Eddie Trunk: "I think they just started recently putting rock bands and heavy metal bands and classic rock bands in there. They just started. I think, of course, we would feel very honored. This is something… To be inducted into the Rock And Roll Hall Of Fame definitely would be something. And I think our fans around the world would be proud of that as well. It's something very special after all. And I know my friend Jon Bon Jovi was… BON JOVI, they were inducted recently, so I think there might be a change in politics, like when they start putting in now heavy metal or classic rock bands; they haven't done this for, I think, forever. And there are many bands who would be proud to be inducted. And for us, being a European band, being a German band, it would mean the world."

SCORPIONS guitarist Matthias Jabs recently said that his band "deserves a spot" in the Rock Hall. "Especially if you see who else is in there, we would fit right in," he said. "And it's not the time yet, but maybe one day. And, yeah, I wouldn't mind."

There haven't been that many metal or hard rock acts inducted into the Rock Hall: BLACK SABBATH, METALLICA, AC/DC, DEEP PURPLE, GUNS N' ROSES, VAN HALEN and LED ZEPPELIN, to name a few.

Rock Hall rules state that artists become eligible twenty-five years after their first records were released, but the Hall also claims that other "criteria include the influence and significance of the artists' contributions to the development and perpetuation of rock 'n' roll," which is, of course, open to interpretation.

Despite being eligible for induction since 1999 — twenty-five years after the release of its first disc — KISS didn't get its first nomination until 2009, and was finally inducted in 2014.