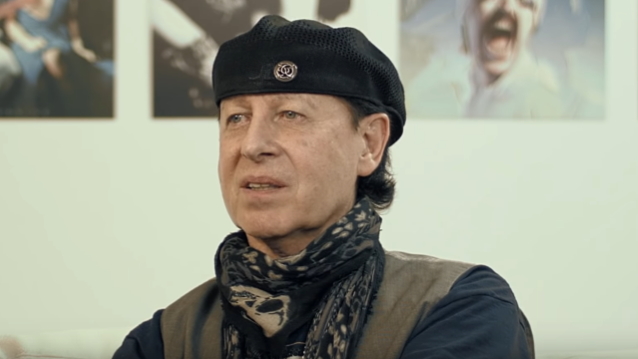 SCORPIONS singer Klaus Meine says that the suggestion that the group's classic ballad "Wind Of Change" was written by the CIA "shows how powerful music can be."

Meine and his bandmates have always maintained that they wrote "Wind Of Change" after performing at 1989's Moscow Music Peace Festival in Moscow, where they shared the stage with other hard rock acts like BON JOVI and MÖTLEY CRÜE.

The theory that "Wind Of Change" was actually penned by the CIA as a piece of late Cold War propaganda was first raised in an eight-part podcast series, also called "Wind Of Change", which premiered on Spotify in May.

Produced by Crooked Media and Pineapple Street Studios, the podcast was hosted by New Yorker journalist Patrick Radden Keefe, who said he launched the investigation after hearing a second-hand story from a friend who used to work for the CIA — that "Wind Of Change" was actually written by the CIA to encourage change throughout the Soviet Union.

In a recent interview with "That Jamieson Show", Meine stated about the CIA rumor (see video below): "I would be ashamed if I would bring up a story like this. Everybody would say, 'Klaus, no. No way.' Like, a marketing plan, 30 years of 'Wind Of Change'. It's, like, you never would go that far, because I don't know anybody who believes that kind of story.

"I think the success of the 'Wind Of Change' podcast is because people get into this, they're drawn into this kind of scenario," he continued. "It's, like, 'Hmm, it could be true. It could be true. Or maybe not. Maybe yes.' And I think this is what this whole story is about the CIA and the SCORPIONS. And everybody picks it up around the world, and I go, 'God. The New York Times? Jeez. Rolling Stone? Again? Oh, come on.'

"On the other side, of course it's not true at all," he added. "It shows how powerful music can be. If they think this song was like a tool to help to bring down communism — I mean, Jeez. [Laughs] It just underlines, in a heavy way, if that would be possible, the power of music.

"We live in times where conspiracy theories are all over the place, in many directions," Klaus said. "And a lot of people start to believe what they see, what they hear or what they think what is the truth and what is for real, and in many cases, it's not. It's also a lot of people, they don't wanna go with the mainstream. It's, like, 'You know what? I know the USA was never on the moon. It was all fake.' There are many people who believe that theory… It's the kind of people, they wanna give you the feeling, 'You believe that? I know better.'"

Earlier in the month, Deadline reported that the "Wind Of Change" podcast was being adapted for television at Hulu.

Alex Karpovsky is writing and executive producing the project, along with Jason Winer. 20th Television is the studio and is producing in association with Winer's Small Dog Pictures, Crooked Media, Pineapple Street Studios and Spotify.

Keefe told Deadline about his decision to explore the topic: "It's a story that stretches across musical genres, and across borders and periods of history. So, it was important to me that you hear the music, and the accents and the voices, and judge for yourself who might be lying and who is telling the truth. I've had so much fun pursuing this crazy story over the course of a year, exploring the dark byways of Cold War history and doing nearly a hundred interviews in four countries with rockers and spies."

Tommy Vietor, the co-founder of Crooked Media, added: "We know that the CIA covertly sponsored cultural events during the '50s and '60s. They paid to film George Orwell's '1984' and 'Animal Farm'. They sponsored a European tour for the Boston Symphony Orchestra. Why not help a German rock band write a power ballad to shred the iron curtain? And while the CIA closely guards its secrets, Patrick is one of the best investigative journalists and writers of his generation, and no one is better positioned to find out the truth."

Back in 2015, SCORPIONS said "Wind Of Change" was inspired by the sight of thousands of Russians cheering them on in 1988 — when they became the first hard rock band to play in Russia — and in 1989, at the aforementioned Moscow Music Peace Festival, even though they were a German band.

"We wanted to show the people in Russia that here is a new generation of Germans growing up," guitarist Rudolf Schenker said. "They're not coming with tanks and guns and making war — they're coming with guitars and rock 'n' roll and bringing love!"

"There were so many emotional moments in Moscow," Meine added. "I guess it could have been BON JOVI or MÖTLEY CRÜE, any of these guys who had gone home inspired by what they saw, but for them it was like, 'Hey! We rocked the Soviet Union, dudes!' For us, maybe it was different. We saw so many changes from Leningrad in '88 to Moscow in '89. That was the inspiration for 'Wind Of Change'."