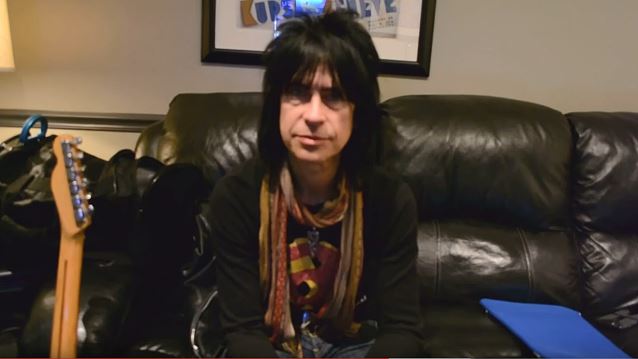 KIX guitarist Brian Forsythe has confirmed that his bandmate Ronnie Younkins went back to rehab earlier this year to receive treatment for alcohol addiction. Speaking to Bob Suehs of Rock N Roll Experience, Forsythe said (see video below): "[Ronnie returned to rehab] for a little bit — for a month and a half, two months. He did kind of a refresher course. He had been sober for a long time and then had this relapse, so we had to stick him back in there just to get him back on track."

Forsythe also talked about his own struggles with substance abuse, explaining that "what brought me down to the bottom was heroin and cocaine." He eventually got sober by spending fifteen days in a Los Angeles jail and then completing a rehab program followed by a stay at a sober living house. He described his two-week stint in jail as "definitely a wake-up call."

Asked if there are any plans for KIX to record a new studio album to follow 2014's "Rock Your Face Off", Brian said: "It's been talked about. I mean, we haven't really worked on anything. It's not gotten past the discussion stage so far."

KIX's seventh album, "Rock Your Face Off", was released in August 2014 via Loud & Proud Records. The band's first collection of new music in two decades was described in a press release as "everything fans know and love them for: a raucous, roaring and real display of rock 'n' roll."