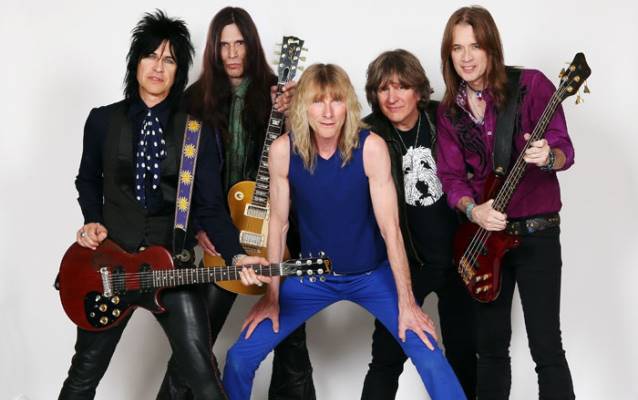 For KIX, not recording any new music for two decades has been far too long. Fans have made it known for years that they want new music. And now, the time has finally come. The Maryland band is primed and ready to "Rock Your Face Off" with their seventh new album, set for release August 5 on Loud & Proud Records. It's everything fans know and love them for: a raucous, roaring and real display of rock 'n' roll. The first single, "Love Me With Your Top Down", will be released to radio and online retail outlets later this month. Eddie Trunk will exclusively world premiere the song during his "Friday Night Rocks" radio show originating from Q104.3 (heard in New York City, Long Island, New Jersey and Connecticut) this Friday, June 20 from 11 p.m. to 2 a.m. ET. It will then air via his numerous North American syndicated affiliates on Saturday, June 20 and he'll play it on Monday, June 23 during his "Trunk Nation With Eddie Trunk" show that airs on SiriusXM's "Hair Nation" channel (39) at 3 p.m. PT/6 p.m. ET.

As guitarist Brian "Damage" Forsythe explains: "When we first played 'Love Me With Your Top Down' live just a few months ago, it went over like gangbusters with the fans. It's a catchy little tune with classic KIX flavor, a perfect choice for the first taste of the record."

What makes the new album even more exciting and anticipated is that it features most of the band's original lineup: Steve Whiteman (vocals), Brian "Damage" Forsythe (guitar), Ronnie "10/10" Younkins (guitar), Jimmy "Chocolate" Chalfant (drums), with the exception of Mark Schenker (bass).

With "Rock Your Face Off", KIX stirs up their truest statement to date in 2014. "It's still hot women, fast cars, and great moments," concludes Whiteman. "I want everybody to end up on their feet, whether they're working out or stuck in rush hour traffic. This is a release, something to lift your spirits when you need it. You can party to this one."